Pigs might not be able to fly, but it seems lab rats can drive 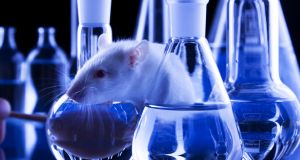 It was not inevitable that the rat would receive such scientific favour. Photograph: iStock

A team of researchers at the University of Richmond recently announced that they had taught laboratory rats to drive small vehicles. A number of videos available on the New Scientist website show rather adorable rodents climbing into tiny motorised “cars” and steering them towards a food reward. As my brother remarked when I sent him the videos, no one is going to let a rat drive a taxi quite yet. However, it is further evidence of the rat’s significant intelligence, and one of the reasons that it remains a favoured laboratory subject.

The lab rat is an extremely versatile animal. Rats are used in a wide range of scientific and medical studies, from the effects of alcohol and nutrition to ways of learning. They are compact, breed quickly and prolifically and their brains are quite similar to human brains. Nonetheless it was not inevitable that the rat would receive such scientific favour.

The lab rat is as much a human creation as it is a product of natural selection. Around the turn of the century, a number of laboratories invested considerable resources in creating a breed of rat that was best suited to biological experimentation. Interest in the rat owes something to the qualities of the wild Norway rat (the species from which most laboratory rats are derived) but also to individual scientists who advocated its use, and to the simultaneous rise of experimental psychology for which the rat proved a very capable handmaiden.

One form of lab rat, a breed of albino rat, was developed around 1905 to 1910 at the Wistar Institute, which was founded in Philadelphia in 1892 as a medical museum and place of biological research. Initially the emphasis was much more on the collections. When Milton Greenman became director in 1905, he nudged the institute towards research and hired Henry Donaldson as chief scientist. Donaldson had an interest in the development of the brain and settled on the rat as a useful animal in which to study mammalian neurology.

Donaldson later claimed to have had the idea of using rats and of keeping a colony of white rats from the Swiss scientist and psychiatrist Adolf Meyer. An immigrant to the US, he worked at an asylum in Worcester, Massachusetts, and appears to have kept his own colony that he used as study subjects. Meyer’s interest in neural development made the rate very useful because, like humans, the rat’s brain changes slowly over time. Indeed, as the rat drivers have demonstrated and Meyer seems to have intuited, rats have considerable “neural plasticity”.

Donaldson was also interested in brain development and the Wistar Institute had established its own colony of rats for his studies around 1907 or 1908. Donaldson settled down to a lifetime of experiments observing the impact of various environment and genetic factors on the development of the rat’s nervous system.

Meanwhile Greenman began thinking of new possibilities for the Wistar rat colony. Applying ideas from industrialisation, he saw the potential of producing a standard rat for laboratory research. From around 1912, offspring of the rat colony were being distributed to other laboratories. At the same time controlled breeding by Helen King was producing a “better” kind of laboratory rat. Donaldson’s experiments led him to publish a huge range of data around the rat’s biology, while King published a guide to breeding the white rat. Soon the Wistarat was purchased across the scientific world.

The rat has since continued to figure in important research, contributing to our understanding of human psychology and biology. The observation of lab rats helped to develop new understandings of sexual behaviour and probably led some scientists to accept that heterosexuality was far from universal. They have been used to form theories about how we learn through conditioning and to study drug addiction. Lab rats have been bred to model human disease including forms of cancer, Alzheimer’s, Parkinson’s and diabetes. They have been used to test treatments before they are used in clinical trials. In his documentary on the lab rat, Manuel Berdoy claimed that one scientific paper involving rats was published every hour (the film is available online and well worth a watch). So important is the lab rat to contemporary science that is almost impossible to imagine that 100 years ago it hardly existed.