Timothy McGrath from Killorglin Community College was one of record 10,000 entrants 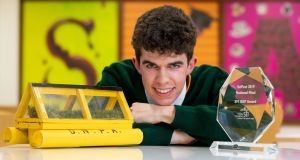 Timothy McGrath will represent Ireland at the International Science and Engineering Fair in California next May. Photograph: Keith Arkins

A student who developed a biofilter to combat “dead zones” in oceans and freshwater, has been named overall winner of SciFest 2019.

Timothy McGrath, a sixth year student from Killorglin Community College, Co Kerry, was one of a record 10,000 students to enter this year’s an all-Ireland competition fostering interest in STEM (science, technology, engineering and maths).

Following 16 regional finals 77 students went on to exhibit 41 projects at the national final in the Marino Institute of Education in Dublin on Friday.

Timothy devised a technically-viable way to use halophyte plants, which are noted for their salt tolerance to counteract eutrophication, which occurs when waters become enriched, often due to human activity, and increases the risk of toxic algal blooms. He will represent Ireland at the International Science and Engineering Fair in California next May.

Sustainability to the fore

Projects on sustainability, climate change and developing bioplastics were to the fore in the contest which is supported by Science Foundation Ireland, Intel Ireland, Boston Scientific and Specsavers.

The Technological Higher Education Association award was given to Ruth Madden, a fifth year student at Largy College in Clones, Co Monaghan, who developed a filter proven to reduce microplastics entering the environment through wastewater from washing machines.

She designed and constructed a low maintenance filtration unit capable of intercepting microplastics. Some 85 per cent of microplastics in the sea arise from washing machines and clothes, she noted, “It’s human-made. It’s horrible.” Ironically, the filter is made of acrylic but it is easily cleaned and reusable.

In a move to counter fast fashion, Willemijn Bosschaert, Eva Connolly and Ella Shanahan, pupils at Loreto Secondary School in Balbriggan, Co Dublin, made a biodegradable fabric by dissolving sodium alginate and polylactic acid and “electrospinning” the solution into a fibre – they won the Berlin Long Night of Science award.

Ronan Walsh from Durrow, who attends Coláiste Choilm in Tullamore, developed a fully-fledged domestic treatment system for grey water arising from showers and washing machines, which uses a variety of filters.

Success came in the form of the ability to constantly water his family’s vegetable plot – unlike what happened during a drought in 2018 – compliance with water quality guidelines and the ability to monitor water quality using smart technology. He work culminated in him wining the Society for Science and the Public Award for Community Innovation.

Alice Shaughnessy, who attends Calasanctius College in Oranmore, Co Galway, literally tried to re-invent the wheel by changing the standard wheel and axle system using magnets and sensors that could make devices “omni-directional” with the ability to negotiate tight spaces. Her prototype, which she believed has obvious potential in robotics and wheelchairs, won the Intel technology award.

SciFest chief executive Sheila Porter said: “The standard of entries this year has been extraordinary . . . The students of today are focussed on the future, the future of our environment and what this means for the global climate. We encourage this year’s entrants to continue to ask questions and be bold in their pursuit in using science to help them understand the world around them.”

Minister for Communication, Climate Action and Environment Richard Bruton said that given climate disruption was the biggest challenge facing this generation of young people, “it’s fantastic to see so many young people engaging with the issue and looking at practical, creative solutions which could contribute to our response. The projects show how STEM can be applied to real world problems, often in unexpected ways.”

Other award winners were:

Marieke O’Connor who won the teacher of excellence award for her mentoring of Timothy McGrath, this year’s overall winner;

Orna Collins who won the Broadcom Masters Award for her project on biodegradeable plastic;

Viktoryia Kharoshankaya who won the Abbott Ireland life science award for her project on sugar cravings;

Caomhán Budhlaeir and Illann Wall who won the ISTA Award for their project on vaping effects;

Aodhán McGuinness who won the SciFest Scientist of the Future award for his project on team performance and the National Football League (NFL) draft.

1 No obvious signs of injury on remains of McGinley children
2 Fine Gael to stress economic warnings as campaign enters crucial week
3 Plenty of politicians’ promises, but what about these ideas to help consumers?
4 Indian independence commemoration to remember former Cork mayor
5 Patient advocate on HSE board resigns in protest at ‘tokenistic’ treatment
Real news has value SUBSCRIBE