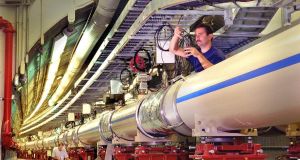 The Cern collider unit. Here, two beams of subatomic protons are revved up to travel at 99.99999 per cent the speed of light around a 27km circuit, before smashing into one another

Astrophysicists puzzle over rotations of spiral galaxies and how light sometimes bends as it crosses the universe. It is as if there is something there, unseen, but causing a gravitational pull. The prime suspect is dark matter.

“It is nothing to do with the dark side of the force, from the Star Wars movies,” jokes physicist Prof Lucio Rossi. “It is dark because we are simply not able to see it.”

The answer to this galaxy-bending mystery may lie in particles smaller than an atom, which Rossi investigates using the largest machine ever built, the Large Hadron Collider (LHC) at Cern, the European Organisation for Nuclear Research.

Here, beneath the Swiss-French border, two beams of subatomic protons are revved up to travel at 99.99999 per cent the speed of light around a 27km circuit, before smashing into one another. Famously, such collisions led to the discovery of the Higgs boson, announced in 2012, a particle first theorised to exist in the 1960s.

“This was the big hunt, like a grand safari. We built three accelerators. It took 50 years,” says Prof Rossi. “We finally got it because we had enough energy.”

Today, a visit to the collider circuit, taking a lift 100m below ground, can be made because it’s offline until 2020. It looks like a steel tube, with rigs on the outside that are superconducting magnets cooled to minus 271 degrees. An upgrade is under way to ramp up the number of protons in each beam, while using magnets that are 50 per cent more powerful to compact the beam. Rossi says, being Italian, it is like tweaking your Ferrari to go 600km/h.

“This should increase the collision by a factor of 10,” says Rossi, who leads the upgrade. He compares this to shining light into a dark room. “Today there may be particles there, but we cannot see them. If we produce 10 times more, we will.” He draws comfort from an instrument called LIGO, which detected gravitational waves in 2015 after an upgrade.

Cern scientists will be on the look out for supersymmetry particles. “We don’t know if they exist,” says Prof Rossi. They could be part of dark matter. “These particles would solve many questions that we have, but so far we have not seen them. Maybe they are just around the corner.”

A minority of scientists doubt dark matter exists. As Einstein said, if we knew what we were doing, we would not call it science, Rossi notes.

Souped-up proton beams is only half the story. Deep below ground lies a 14,000 tonne engineering leviathan wrapped in steel. This is the CMS (compact muon solenoid) detector, 21m high, 15m long. Also in a deep cavern is Atlas, a 7,000 tonne detector 46m long and 25 in diameter. The two detectors do a similar job, but are run by separate teams. Both are being upgraded.

“It is like a very fancy 3-D camera wrapped around this beam of particles as they collide,” says Prof Val O’Shea, a physicist at the University of Glasgow. “It takes pictures at 40 million frames per second and has got 100 million pixels.”

It’s a very strong magnetic field. If you had a pacemaker in there you would die

The Cork native has worked on Atlas since 1992, initially as part of an Italian research institute. Since Ireland is not a member of Cern, Irish researchers cannot become Cern staff and Irish institutes cannot take part in its experiments. “It precluded me getting a job at Cern,” adds O’Shea, matter of factly.

The detectors deploy powerful magnets to bend the trajectory of charged particles generated by the collisions to measure their mass, speed and energy. “It’s a very strong magnetic field. If you had a pacemaker in there you would die,” he notes.

The Atlas and CMS teams are in competition. “It is very important to have two teams working independently in order to produce results that are credible,” O’Shea says.

The upgraded collider will switch on around 2024, and will operate until 2040

At the site of the CMS detector, as upgrades continued this summer, French physicist Dr Stephanie Beuaceron recalls that both teams detected the Higgs around the same time. “It was a rumour first. Plenty of physicists are married here,” she quips, and we share printers. “You started to feel the excitement [around the coffee areas].” Officially, only the director general knew the results of both teams.

Ireland would gain hugely from membership of Cern, says O’Shea, in terms of industry suppling equipment, including for big data and supercomputing, but also in training bright new students. “I am always surprised by the fact that Ireland is not part of Cern,” says Rossi. “Countries much poorer than Ireland have joined.”

The upgraded collider will switch on around 2024, and will operate until 2040. Cern hopes eventually to build a 100km next-generation collider, seven times more powerful.

Cern is not just shedding light on the nature of our universe – it has spin-offs for medicine. One is Hadron therapy, a new treatment for cancer, in which tumours are bombarded by protons. Essentially, this means installing a mini Hadron collider in Irish hospitals, notes Prof Ronan McNulty, particle physicist at University College Dublin.

Prof O’Shea has spent years working on a new imaging system sensitive to the energy (colour) of X-rays, which could be used for medical scanning but with far less radiation and more detail for diagnostics.

The particle physics community in Ireland is fairly small, and O’Shea notes it would need to grow (and be funded) to take full advantage of membership. Science Foundation Ireland is not set up to fund blue sky science, he adds.

‘Unacceptable’ that Cahersiveen direct provision staff not Garda vetted 20:31
Coronavirus: Need to move away from the ‘language of blame’ - Holohan says 20:22
Just a quarter of suspected Covid-19 breaches have been charged 20:02
University of Limerick head resigns over personal Covid-19 health concerns 19:40
Dig for remains of Red Hugh O’Donnell finds skull and coffins 19:18