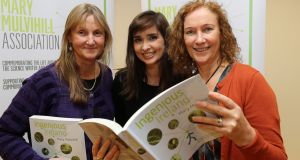 Back in print: Anne Mulvihill, Aoibhinn Ní Shúilleabháin and Nóirín Mulvihill at the launch of the reprint of Ingenious Ireland by Mary Mulvihill. Photograph: Nick Bradshaw

One of the most celebrated books published about Irish science and technology – Ingenious Ireland by Mary Mulvihill – has been reprinted.

First published in 2002, the “county-by-county exploration of Irish natural wonders and scientific heritage” was out of print for many years.

The reissue of the book was marked at an event in the Irish Emigration Museum in Dublin on Thursday.

Mulvihill, who died in 2015, was a pioneering science writer, a regular contributor to The Irish Times and a broadcaster. She was also instrumental in founding Wits (Women in Technology and Science).

The book is noted for its sheer breadth and depth, according to her friend , the science writer Cormac Sheridan. He described it as “a one-woman encyclopedia”, confirming her great engagement in everything to do with science and technology in her native country.

“In Ireland, as in this book, there are seams of gold (Wicklow, Monaghan) and silver (Sligo, Galway), and pearls and diamonds (Derry, Fermanagh) also,” said Irish astrophysicist Jocelyn Bell Burnell. “She hangs snippets and stories on places, and enlivens those places through the stories related to them. Geology, archaeology, sociology and technology jostle each other, producing interesting interactions,” she added in the preface to the new edition published by Four Courts Press.