Membership of organisation is critical to becoming ‘a global innovation leader’ 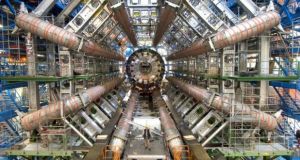 Ireland should join Cern, the European Organisation for Nuclear Research, if ambition to be a global leader in innovation is to be realised, the Oireachtas Committee on Business, Enterprise and Innovation has strongly recommended.

Based outside Geneva in Switzerland, Cern is one of the world’s leading scientific laboratories. Its primary focus is on particle physics but it also plays a vital role in developing the technology of tomorrow.

Breakthroughs there helped develop technologies in MRI scanners and radiation therapy in hospitals, touch-screens and the world wide web. It also built the Large Hadron Collider tunnel, the world’s largest machine, which has enabled groundbreaking research.

In a report issued on Wednesday, the committee recommended Ireland initially seek associate membership of Cern as soon as possible with the Department of Business, Enterprise and Innovation providing the funding.

Committee chairwoman Mary Butler said Ireland was one of only three European countries without any formal agreement with Cern. Membership was critical to becoming “a global innovation leader driving a strong sustainable economy and a better society”, she added.

It would bring scientific benefits at research level, and enable Ireland move to the forefront of innovation in a number of sectors, including manufacture of microelectronics, sensors and big data, she said.

Fianna Fáil science and technology spokesman James Lawless, who is a member of the committee, said the case for membership was clear-cut and joining it was now the endorsed position of the houses of the Oireachtas: “. . . it’s up to the Government to act on this,” he said.

While some had in the past expressed reservations about joining on cost grounds, there was an economic imperative to join, he said.

Prof Ronan McNulty of UCD, who was involved in Cern research that led to observation of the Higgs boson (known as “the God particle”) in 2012, said the organisation was “the greatest scientific collaboration in the world”.

Membership would bring benefits to education, training, research, international competitiveness and to create an environment for Irish companies to do business in. He did not think the cost was a large figure, “based on what we can get back”.