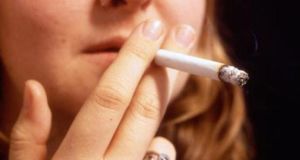 Cancer death rates in men have declined by eight per cent over the past five years, but cancer deaths among women have only fallen by four per cent, a new study shows. Photograph: PA

Death rates for cancer will continue their gradual decline across the European Union this year, but the improvement is slower among women because of deaths due to lung cancer.

Lung cancer deaths are actually higher for women aged between 25 and 44 than they are for men, according to research that will be published on Wednesday in the journal Annals of Oncology.

Death rates are falling for all types of cancer except for lung cancer and pancreatic cancer, according to the study led by Prof Carlo La Vecchia of the faculty of medicine at University of Milan.

He joined with researchers in Switzerland and the United States to make predictions about the numbers of deaths from each type of cancer for men and for women.

Death rates in men have declined by eight per cent over the past five years, but cancer deaths among women have only fallen by four per cent, the study showed.

A total of 761,900 men and 611,600 women across the EU are predicted to die from all cancers during the coming year, Prof La Vecchia said.

He predicted a rise of about five per cent this year among women but the number of lung cancer deaths for men will decrease by 11 per cent during 2017.

This is the seventh year that Prof La Vecchia and colleagues have published these predictions and their report showed that pancreatic cancer continues to be a problem, with 119,900 total deaths expected.

“There has been little progress in the detection, treatment and prevention of pancreatic cancer and it is now the fourth-highest cause of cancer death in both sexes,” Prof La Vecchia said.

The slow decline in cancer deaths means that people are alive today that would not have been without better diagnosis and treatment. “In 2017 alone we predict that 253,915 deaths will be avoided in men and 107,780 in women due to the fall in death rates since 1988,” he said.

An estimated four million cancer deaths have been avoided over the past 30 years, he said.

In Ireland, an average of 40,000 new cases of cancer are diagnosed each year, with the most common being skin cancer, prostate cancer, breast cancer, bowel cancer and lung cancer, the Irish Cancer Society says.

Cancer is the second-biggest killer in Ireland after heart disease, with more than 9,000 cancer-related deaths a year.

Incidence of cancer is increasing and by 2020 one in two of us will get a cancer diagnosis over a lifetime.

Treatment, however, is also improving leading to a decline in deaths.