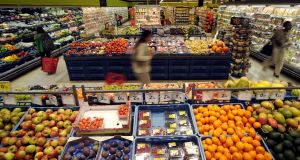 The 10-a-day portion list includes an apple, a small banana, a pear, a mandarin, three tablespoons of spinach, peas, broccoli or cauliflower. A portion weighs in at 80g. File photograph: Eric Vidal/Reuters

Medics have upped the ante on fruit and vegetables with a new study promising that while “five a day” is very good, “10 a day” is even better.

The researchers from Imperial College London promote their claim with a suggestion that eating all this extra fruit and veg may prevent 7.8 million premature deaths worldwide.

They go so far as recommending what fruits and vegetables to eat to ward off specific diseases.

The old advice used to be an apple a day kept the doctor away, but the recommended amount of fruit and vegetables gradually began to increase on the back of large-scale human dietary studies.

The question this latest study asked was simple: is there any health benefit from eating 10 fruit and veg portions a day – 800g worth – instead of the currently recommended five?

The emphatic answer turned out to be yes, according to Imperial’s Dr Dagfinn Aune, lead author of the research report. Although five a day is good, “10 a day is even better”, he said.

The research team showed eating all those apples and carrots and peas could deliver a 24 per cent reduced risk of heart disease, a 33 per cent risk reduction for stroke and a 28 per cent reduction in cardiovascular disease. Cancer risk fell by 13 per cent and premature death risk dropped by 31 per cent.

These risk rates were calculated in comparison to not eating any fruit or veg.

The 10-a-day portion list includes an apple, a small banana, a pear, a mandarin, three tablespoons of spinach, peas, broccoli or cauliflower. A portion weighs in at 80g.

The researchers found one could reduce the risk of heart disease, stroke and cardiovascular disease by eating apples, citrus fruits and green leafy vegetables among others.

Cancer risk falls if you eat green and yellow vegetables such as broccoli and cabbage. Including these food items has been shown to reduce cholesterol and blood pressure and boost the immune system, Dr Aune said.

The research is published on Thursday morning in the International Journal of Epidemiology .