More than 1,500 scientists issue funding warning and call for department for higher education and research 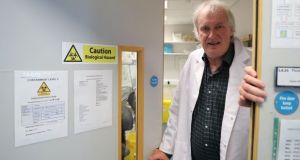 Prof Luke O’Neill is among the signatories of the letter urging political parties to make the establishment of the new department a priority in the government formation talks. Photograph: Nick Bradshaw

If Ireland’s higher education and research sector is left to face its current financial challenge on its own, “with the State ignoring it the way it has over the last decade, then it will buckle” – more than 1,500 leading Irish scientists have predicted.

In an open letter to TDs, the scientists, including many leading the fight against coronavirus, call for “a Cabinet-level department for higher education and research”.

The high-profile role scientists have played in the Covid-19 emergency has brought the nation’s higher education and research sector to the forefront of public attention, they say, but the on-going funding crisis will undermine their ability to respond in future.

They urge political parties to make the establishment of the new department a priority in the government formation talks. The signatories “fear the country will pay the price in future crises and miss opportunities for innovation if government doesn’t recommit to proper investment and attention for higher education and research urgently”.

“Ireland needs a dedicated government department, with a full Cabinet minister, mandated to support science, research and higher education and to champion the sector”, they add. “This change of focus would enhance Ireland’s recovery prospects and its ability to develop a green and sustainable economy.”

Lead signatory Prof Luke O’Neill of Trinity College Dublin said: “Now more than ever and into the future we need outstanding researchers. Without them, Ireland will become a backwater when it comes to science and discovery, to the detriment of our reputation internationally, including with multinationals.”

Stressing their desire to be a partner to government in helping map out and underpin the best ways forward for Ireland, Prof Noel Lowndes of NUI Galway said “prioritising funding of higher education and research is crucial to building national recovery and ensuring future prosperity and preparedness”, as “in an evidence-based world our drive for a knowledge economy depends on it.”

– investment in research is “well below the EU average”;

– growing demand to increase student numbers (a further 35,000 expected over the next decade);

– core public funding per third level student “now only 40 per cent of what it was a decade ago”;

A Higher Education Authority (HEA) report this month highlighted the “immense” financial consequences facing the sector, estimated to be at least a €500 million shortfall in total this year and next. A leaked Department of Education discussion document, however, indicated resistance within Government to a bailout package.

This document said the HEA report on financial challenges facing the sector “does not provide the level of granularity required” to make an informed and evidenced-based funding and budgetary decisions.

“Additionally, this runs the risk of not concentrating Government’s fiscal firepower where it can be most effective in pre-empting failures and maintaining employment levels,” it said. This was “clearly stated” in discussions; that there is “no commitment or expectation of additional funding for the education sector at the present time”.

Dr Kevin Byrne of University College Dublin said huge support for the letter, with well over a thousand scientists signing in under 24 hours, “reflects the demand for improved governance of our sector and the widespread concern at the future of higher education and research in Ireland”.

“As practicing scientists we know how much the crisis in Irish research has deepened in the last five years. There is a reluctance to talk down our sector, which still contains world-class scientists and institutions, however we know the impact further years of drift will have on our ability to educate, retain and recruit the best, and on the nation’s ability to respond to challenges like Covid-19.”

Five years ago 1,000 scientists wrote to the Government urging a rebalancing of funding toward basic research. “Basic discovery research is exactly the type that produces the scientists, skills and serendipitous solutions we need when faced with an unexpected challenge like Covid-19,” the latest letter notes.

“Half a decade on from that letter little has changed for the better. The crisis in Irish research has deepened and risks becoming fatal if not addressed.”

The letter with signatories is available at IrishScientists.org