What was the food culture in Ireland before the potato?

The Food Cult project seeks to understand the social, economic and political relevance of food in 16th century Ireland 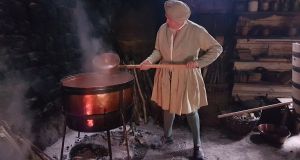 A 16th century brewhouse at the Weald and Downland museum in West Suxxex. “We want to understand how stone masons could drink 14 pints of beer and build cathedrals”

A five-year inter-disciplinary study into the diet and eating habits of Irish communities in the 16th and 17th century aims to bust some myths about the Irish being an inward-looking people while shedding light on a period of history not well researched in terms of its food.

The European Research Council-funded Food Cult project brings together history, archaeology, science and information technology researchers whose knowledge and skills will be combined to test theories and analyse data about what people in Ireland ate from 1550 to 1650.

“We will be asking questions like was there a food culture in Ireland before the potato? What was the impact of war on diet? Did the lower classes eat as the elite said they did?” says Dr Susan Flavin, associate professor of early modern history at Trinity College Dublin.

“We want to understand what and when people ate certain foods, and how they developed their identities through it. We want to look at the impact of globalisation on the Irish diet, or how new ideas about manners or health or religion (eg the demise of the Lenten fast after the Reformation) changed the diet of Irish communities.

“We know there was trade from France and Spain with the west of Ireland, but the Gaelic Irish didn’t keep records of this,” Flavin adds.

Using food as a way of exploring the past is in itself a new research area, but what marks out this project is the cross-referencing of knowledge and data that will be used to find out more about how people lived in this period.

So, for example, the household records of Dublin Castle or Christchurch Cathedral will be used to understand what foods were purchased for consumption. These historical records will be cross-referenced with molecular analysis of human skeletons (and/or teeth) and animal bones, and chemical analysis of pots from the period to discover who ate which foods.

“We want to understand if dairy was more important than meat by analysing the animal bones to see if the cattle were dry stock or dairy. We want to understand how stone masons could drink 14 pints of beer and build cathedrals,” adds Dr Meriel McClatchie, associate professor of archaeology and director of the Ancient Food Research Group at UCD.

“We have made beer from heritage grains and reproductions of the equipment used at the time [made by artisans following images from woodcuts] to find out how much alcohol was in it,” says Flavin.

Meanwhile, Prof Janet Montgomery from the archaeology department at Durham University will do chemical analysis of different skeletal remains to identify different concentrations of alcohol at different locations.

The Food Cult researchers are also interested in finding out if the daily diet varied depending on whether people lived in coastal or inland parts of Ireland. “There was an influx of people into Ireland during the Elizabethan colonisation, so we want to find out about the impact of Irish diet on English practices as well,” says Flavin.

Historical records point out that Irish people didn’t eat much meat – they ate salty bacon, peas, beans, butter and cheese [this period pre-dates the widespread use of potatoes in Ireland] but was that based on bias or observation?” shes asks.

How children were fed in this period is another area of potential discovery.

“Infant nutrition has never been looked at for this period. There is evidence that infant feeding bottles came to Ireland in the late 16th century, and settlers might not have wanted to give their babies to Irish wet nurses [women who breastfed the babies of other women] as humoral theory [an early medical theory which defined the body according to four humours, hot, dry, wet and cold] suggested a suckled baby might take on part of the nature of the woman who fed her,” says Flavin.

During this period, she adds, elite groups wanted to distinguish themselves from the peasants, and food was one of the ways to do so. “Historical records point to these elite groups eating ‘white foods’ which included all kinds of domesticated fowl and wild birds,” she says.

“The 16th century was a period of war and destruction. There was scorched earth warfare in which [opposing sides] burned crops and killed each other’s animals. Siege warfare in towns meant that populations were often starved before they died,” Flavin adds.

New scientific techniques can now identify and date seeds from fruits, the shells from nuts and different cereal grains. And researchers at McClatchie’s archeobotany laboratory at UCD will collate research on these foods from previous excavations.

Environmental archaeologist Dr Ellen O’Carroll will create the Food Cult project’s dietary map of everything that links different communities to what they ate during the period. “We will be able to extract information on hops, barley, cooking pots, knives, clay pipes and plot this information all over Ireland,” she says.

This data, which will be drawn from thousands of archaeological digs carried out in Ireland over the past 20 years, will then be statistically analysed by Prof Andrew Parnell from the department of mathematics and statistics and Maynooth University. He will search for new patterns in diet and eating habits which – the researchers hope – will bring new knowledge about food history.

The database, and results, will be available to future researchers once the project is complete.

“Researchers will be able to look at what people were eating in Thurles in the 17th century, what pots they used and what foods they cooked, look at comparisons with neighbouring counties, and understand the extent of new forms of consumption across Ireland,” says McClatchie.