Minister for Health Simon Harris says that the current regulations requiring people arriving into Ireland via air or sea to fill out a locator form will be reviewed on June 18th. Video: Oireachtas TV 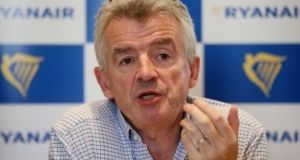 Ryanair group chief executive Michael O’Leary said having travel controls at ports and airports when people could cross the border from Northern Ireland was not a quarantine, it was ‘simply political game playing’.

Dr Scally said he did not know where Mr O’Leary had received his information, and he told RTÉ Radio’s Today programme he did not think that anyone should take public health advice from the Ryanair boss.

Mr O’Leary has said Ryanair was following advice from both the European Centre for Disease Control and the European Safety Authority, which was that air travel was safe if face masks were worn and there were temperature controls in conjunction with the use of hand sanitiser.

“It’s time for Ireland to get moving. It’s time to get back flying, using face masks,” said Mr O’Leary, who has criticised the planned 14-day quarantine for travellers which comes into operation on Thursday.

Having the travel restrictions for people arriving at airports and ports when people could cross the border from Northern Ireland was not a quarantine, it was “simply political game playing”, Mr O’Leary told RTÉ’s Morning Ireland.

Once a person who had arrived at the airport got on a bus the infection would spread if they had the virus, he said.

However, Dr Scally, the Northern Ireland-based author of the Scally report into the CervicalCheck controversy and president of public health at Royal Society of Medicine, said Mr O’Leary “might have a vested interest”.

Now that Ireland was in a good position with the number of Covid cases reducing, “the last thing you need to do is to start bringing cases in from elsewhere”.

Other countries such as China, South Korea and islands like Australia, New Zealand and Taiwan had very effective quarantine measures which had made it easy to immediately identify when new cases were imported.

Dr Scally said flying was still a mass gathering and, as such, was not a safe activity. Masks would help but even with fewer passengers there was still a risk of spreading the virus, he said. “There is no doubt in my mind.”

There remained “huge risks” when people come close together which was why the two metre physical distance guideline was important. The risk of transmission increased rapidly if that distance was reduced, he said.

Dr Scally added that quarantine for those arriving into Ireland from overseas should be mandatory, rigorously enforced and observed. People arriving into the country needed to be seen at the airport and told in advance that it was not acceptable to get on public transport straight off a flight and there were plenty of empty hotels around airports where people could be quarantined.

Sinn Féin’s health spokesperson Louise O’Reilly said that Mr O’Leary was “trying to drum up business for Ryanair. He is not a public health expert”.

The TD said she understood that people were frustrated and wanted life to get back to normal but it was important that any move back to normality had to be done safely, guided by public health advice.

Ireland needed to be guided by the experiences of other countries and if something was working in another country then “we need to look at that.”

Kingston Mills, professor of immunology at Trinity College, said he had “huge sympathy” for Mr O’Leary and the aviation industry, but any changes to the regulations and restrictions “had to happen in an ordered way”.

He said it was important not to “import” cases into Ireland from countries “not doing well” such as the US and Brazil.

“If we get the numbers down, the best way to keep it down is not to import any cases.”

Prof Mills said the Government advice was not to travel, but that there needed to be an adaptable policy based on where the virus was at that time.

“It is unrealistic to quarantine everybody at the airport. We expect people to do as in other countries, to commit to self quarantine for 14 days, in recognition that people may have asymptomatic carriage of this virus and may not be aware that they are potentially infectious.

“We should take great care before we jump in and reverse those significant gains we’ve made since March 27th in bending and smashing that curve.

“At this point in time we would not be advising people to fly.”

Dr Henry noted that Ireland had made significant gains, including a 70 per cent reduction in the number of people in intensive care units. “We’ve seen the virus beaten off the streets of our towns and cities into households, so much so that the number of contacts per identified case has gone from a peak of about 20 now to less than three and in some cases, two. Those gains have been hard fought for.”