Ireland in line for grants of €1.9bn in scheme weighted by how badly economies have been hit 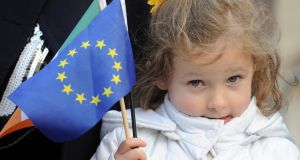 The European Commission will propose a stimulus package of as much as €750 billion in an unprecedented push to overcome the deepest recession in living memory. Photograph: Laura Hutton/RollingNews.ie

The European Commission is to propose a €750 billion fund to counter the economic damage of the coronavirus pandemic that would be raised by joint borrowing in what could be a landmark shift towards integration in the European Union.

Most of the rescue package will be in the form of grants to member states, funded by borrowing by the commission that would be jointly guaranteed by member states.

The plan earmarks €1.91 billion in grants to the Republic, according to a copy of the breakdown seen by The Irish Times. The allocation is weighted according to how severely countries have been affected by the pandemic and its economic impact, with the largest chunks going to Italy on €81.8 billion, Spain on €77.3 billion, and France on €38.8 billion.

“This is Europe’s moment. Our willingness to act must live up to the challenges we are facing. National efforts alone will not be enough,” reads the commission document presenting the plan to national leaders. “This is our defining generational task.”

The plan is likely to have the backing of the big EU powers of Germany and France, who jointly called for half a billion euro in grants to smooth out worsening economic imbalances in the bloc that threatened to compound the damage of what is expected to be the worst downturn in a century.

But there is sure to be disagreement over the details of the plan and it is expected to face opposition by the so-called “frugal” group of countries, which favour helping weaker economies with loans that they must repay, rather than through grants, and are wary towards a costlier EU and joint debt.

“Negotiations will take time,” a Dutch diplomat said, noting that adoption of the plan requires unanimous agreement of the 27 member states. “It’s difficult to imagine this proposal will be the end state of those negotiations.”

The pandemic caused a continent-wide economic collapse as people stayed in their homes, seriously damaging public finances as tax revenues dried up and governments unleashed spending to keep businesses from going under and to support the newly unemployed.

The recovery plan aims to counter the risk of a default by vulnerable countries such as Italy, even out economic imbalances, and prevent the contagion of downturn given the highly integrated nature of European economies.

The amount of grants to be made available to member states is calculated based on the impact of the pandemic on their economies, and aims to even out differences between member states caused by the varying ability of national governments to offer support.

“Countries and regions with economies dependent on client-facing services, exports or a high number of small businesses, will be hit much harder than others,” the commission document reads.

Member states must apply for the grant money by proposing investment and reform schemes that would make progress towards joint EU priorities, such as digitalisation and transforming economies to cut carbon emissions to avoid catastrophic climate change.

The money is to be raised by allowing the commission to use its AAA credit rating to borrow up to 2 per cent of EU Gross National Income on financial markets, and is part of the next joint seven-year budget that is due to begin in 2021.

To bridge the gap until then, the commission has proposed amending the current budget to make €11.5 billion available this year.

The commission proposes repaying the borrowing in future EU budgets between 2028 and 2058. To help repayments, it has asked member states to give it the ability to raise money itself, such as by an import tax on carbon emissions or a digital tax. Due to different sensitivities among member states, these ideas may be a topic of fierce debate.