Leinster goes platinum: a survey from the sky 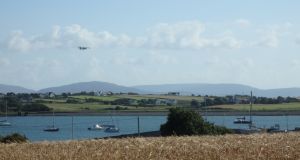 If you live in Donegal or north Mayo, don’t take fright later this month if you hear an aircraft passing little more than a stone’s thrown overhead. It is likely to be a survey aircraft studying Ireland’s geology.

The northwest is the next region of Ireland to undergo intensive analysis as part of the Tellus programme run by the Geological Survey Ireland. It involves using aircraft flying at 60m overhead and deploying sample collectors on the ground to provide information about our geology, says Ray Scanlon, a principal geologist at the National Earth Science Agency and programme manager for Tellus.

The programme started in the Republic of Ireland in 2011 with aerial and ground data collection. The 2016 campaign looking at Galway and Mayo and neighbouring parts of Roscommon, Offaly and Tipperary finished in October. The next starts with low-level flights, which will begin at the end of February, and ground surveys, which will begin soon after, says Scanlon.

The goal is to better understand the physical and chemical properties of the soil, rocks and water of Ireland.

“It is good to know because the information is extremely useful for a wide range of stakeholders,” he says.

The data will be used to improve the agency’s maps, which are used by engineers involved in construction, for water protection and geotechnical works.

Teagasc uses the data to understand soil chemistry for use in smart agriculture. Some soils have better supplies of essential trace elements, including selenium, but farmers must give cattle selenium in areas where this is absent.

Mineral exploration companies use the maps to learn where they might start drilling next. For instance, the presence of arsenic can indicate hidden gold deposits.

The Geological Survey of Northern Ireland got UK funding for a ground and aerial study, which was completed in 2008. The Republic received €5 million in EU funding to do the same here, and now running costs for the programme are covered by the Department of Communications, Climate Action and Environment.

Contractors help run the flights and support the ground survey activity. The aircraft, a De Havilland Twin Otter, uses GPS to fly back and forth along pre-planned routes. Scanlon describes the activity as being like “mowing the grass”.

The aircraft carries three instruments: one measures magnetic fields in the ground, one detects and measures radioactivity in the soil, and another can detect magnetic fields several kilometres underground.

The ground team take topsoil and subsoil samples, and sediments from nearby water courses. A water sample is also collected.

The aircraft instrument can read how much radon is coming from the soil. This naturally occurring radioactive gas is a real hazard if found at high levels, and causes more than 200 deaths from lung cancer each year.

“We are refining the national radon risk map to highlight new areas that are naturally high in radon.”

However, the presence of radon also means there are good opportunities for accessing geothermal energy to heat homes and offices, and the data shows where these areas are; Galway is one.

The instrument can also detect the remnants of the radioactive caesium deposits left here after the 1986 Chernobyl disaster.

The survey has thrown up some surprises, says Scanlon. “We found platinum in the sediments of southeast Leinster. We were looking for gold and found more than we expected, but we also found platinum – quite a significant amount in Wicklow.”

The aerial readings also help pinpoint where water sources are threatened by seawater incursion or pollution, something that is happening along the Co Louth coastline, he says. Water extraction from coastal aquifers is causing subtle changes in the local ecology, drawing in salt water and sometimes pollution.

“A lot of the data feeds into science and research, and is then developed into a product,” Scanlon says. About 200 academic papers have already been produced from the data made available by the survey.

Each round of flights and ground sampling requires “a really comprehensive outreach programme a month before flights begin”, he says. It gives farmers with livestock or stud farms time to move or shelter their animals as the aircraft passes by.

“By the end of the year we will have finished about 50 per cent of the country, roughly on a line from Greystones to Galway Bay, the top half of the country,” he says.

The air and ground surveyors will then turn southward. It is hoped that the national survey will be complete by 2023.

GROUND SURVEYING: A DIFFICULT PROPOSITION
The ground-based geological surveying provides essential data, but it can be a tough, messy job, says Tellus project manager Aoife Brady. She has been out in the field, digging up soil samples, collecting sediment from the bottom of streams and taking down all kinds of local details.

Tellus samples from 3.5km grid squares and is guided to a possible collection point by GPS. Once there, the crew chooses a suitable place to collect the soil and water samples, looking for undisturbed ground as much as possible.

“You have to be careful in upland areas or sampling in streams,” she says. “It is a lot of hiking, but that is part of being a geologist. As a geologist you have to be ready to go out in all weather, so you just get on with it.”

Sometimes it is straightforward: you get to the sampling point and it is easy to find a good location. “The more difficult it is to get there or get your samples, it slows down the sampling rate,” Brady says.

For all the problems, they have tramped through some very scenic places. “It is a lot of fun. You spend your day outside and exploring parts of Ireland, going to places you have not seen before,” she says.

“You are getting your hands dirty but are not sitting behind a desk. And when you see [scientific] reports coming from the data you think, I collected all that raw material.”