Harvard University and Boston Children’s Hospital researchers have developed a customised soft robot that fits around a heart and helps it beat, potentially opening new treatment options for people suffering from heart failure. This demonstration on a pigs heart shows how it works. 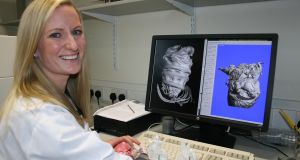 An innovative soft robotic sleeve which can help a heart to beat has been developed by researchers including Dr Ellen Roche (above) of National University of Ireland Galway.

A Galway bioengineer has designed a heart pumping device that can help overcome heart failure.

A gentle hug in the right place is all that is needed to keep blood flowing and avoid the dangers of an improperly beating heart.

Work started on the project in 2012, according to Dr Ellen Roche of Salthill, Galway, who took her bioengineering undergraduate degree at NUI Galway and a Masters at Trinity College Dublin before signing on for a PhD at Harvard.

She started working with Prof Conor Walsh at the Harvard Biodesign Lab and surgeon Frank Pigula, based at the Boston Children’s Hospital, and later with the Wyss Institute at Harvard.

“I was trying to come up with an idea for a PhD that would merge everyone’s interests, robotic devices, cardiac devices and bioengineering,” Dr Roche said.

There was a lot of brainstorming, and the result was a project to build a sleeve that could be placed around the heart, capable of beating in synchrony with the organ and helping to deliver a full blood supply in patients with heart failure.

Heart failure is a condition where the heart is unable to pump enough blood to meet demand.

There are heart assist devices but these have a problem, she said.

“Current devices take blood from the heart and pump it around but the blood has to go through a pump and this can cause clots, which in turn can cause stroke and negative side effects,” Dr Roche said. “I wanted a device that did not touch blood.”

A team of 10 began working on the project given its complexity and mix of bioengineering, electronics and surgical skills.

They experimented with a sleeve and with a “wrap” that a surgeon would position around the heart.

“Synchronising with the heartbeat was critical,” she said. “We used a pacemaker to control the heart and trigger our device.”

They built prototypes for silicon models, then hearts recovered from pigs and then in live pigs.

The live pig experiments showed the device works. “We induced heart failure and used the device to bring back the heart,” she said.

Details of their work were published in Science Translational Medicine on Wednesday, with Dr Roche as lead author.

“It was a lot of work so it was really nice to see it coming out. I feel proud for this being printed,” she said.

Dr Roche will remain at NUI Galway until September, when she leaves to set up a bioengineering research lab at Massachusetts Institute of Technology in Boston.