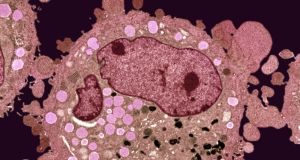 Central to the work, which involved Trinity College Dublin, St James’s Hospital, the Coombe hospital and the University of Hull, was the isolation and study of cancer stem cells. Photograph: Getty Images

Irish-led researchers have found a way to make it potentially easier to kill off tumour cells and make radiotherapy more effective for people with oesophageal cancer.

There are about 390 new cases of oesophageal cancer in Ireland a year, and a similar number of deaths. It is extremely difficult to treat, as the majority of patients are resistant to treatment.

Incidence of the disease is also soaring worldwide, rising by 600 per cent over the past 30 years.

Central to the work was the isolation and study of cancer stem cells, which can self-renew by dividing and also give rise to other cell types that constitute tumours.

The researchers found the stem cells protect the tumour by helping the cancer to resist radiation and replenishing tumour cells destroyed in treatment.

“Our findings strongly suggest that it is the cancer stem cell population that we need to destroy if treatment is going to be effective in our oesophageal cancer patients,” said Dr Maher, who is ussher assistant professor in translational oncology at Trinity.

“Up until recently, cancer stem cells were largely considered hypothetical, as there were no clear ways to identify and isolate them.”

The team found the cancer stem cells had low levels of a substance called miR-17. When they put a synthetic version of this substance into resistant cells, they were killed off more easily by radiation.

“We could use synthetic miR-17 as an addition to radiotherapy to enhance its effectiveness in patients,” said TCD’s Dr Niamh Lynam-Lennon, who was also involved in the research.

The Irish Cancer Society’s head of research, Dr Robert O’Connor, welcomed the findings. “Such findings are key in better understanding why some tumours do not respond as might be expected to treatment,” he said.

Funding for the research came from the Health Research Board. Details of the findings were published in the journal Oncotarget.