The insects have started early due to the weather, but a cold snap could wipe out hives 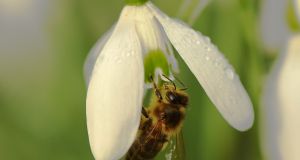 Bees foraging in Limerick this week. They may be tricked into breeding too early by the weather. Photograph: John Breen

The mild winter weather has encouraged bees across Ireland to start foraging in mid-January, but this early activity could prove disastrous for hives in the event of a cold snap, an expert has warned.

The bees’ confusion over whether it is time to come alive is easy to understand, given spring is nowadays arriving three weeks earlier than it did 50 years ago.

Bees may be tricked into breeding too early, but the hive could be killed if a cold snap hits, said Prof John Breen, an expert in bee ecology retired from University of Limerick.

He took the photograph above in South Circular Road, Limerick, last Tuesday.

“Honey bees tend to fly any time once the temperature is over eight degrees, but I was surprised they were out and collecting pollen so early,” he said.

He saw honeybees and bumblebees visiting snowdrops and a winter flowering daphne plant on Tuesday.

The bumblebees should be overwintering for another month, he said.

“If a cold patch follows, say in March, it would be disastrous if they start breeding early. It could kill the hive. ”

This is just one of the many risks associated with higher temperatures brought about by climate change, according to Dr Matthew Jebb, director of the National Botanic Gardens of Ireland.

“It has been a remarkably long drawn out autumn and we had a number of things bloom in error.

“It harms a plant because they develop one set of buds to breed, so if it is tricked into early flowering it won’t reproduce that year.”

The gardens have been monitoring leaf break and flowering since 1968 and this shows spring now arrives three weeks earlier.

Mathematical analysis shows the temperature averages from 1968 effectively have migrated northward, “travelling at a horrendous rate of 4km a year”, Dr Jebb said.

“It is breakneck speed and biologically nothing will be able to keep up with it other than birds.”

The egret is just such a survivor, now breeding readily in Ireland despite a former life in Africa and southern Europe.

The southeast Asian Tree of Heaven is highly invasive but not here.

“They have started to flower and fruit for the past four years. They were never a problem but climate change is catching up with them and they are now starting to breed,” Dr Jebb said.