Irish-based scientists find a way to beat stress by eating 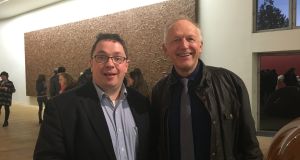 Scientists in Cork have come up with a way to counter stress just by eating the right foods. The stress-beating menu has shown it works well in mice and efforts are under way to get human tests going.

The work comes from the APC Microbiome Institute, a lab that for years has made important discoveries about how the microbes in your gut can influence your health and wellbeing.

This study looked at including two prebiotics in the diet that encouraged the growth of certain gut bacteria that have a direct impact on stress, mood and behaviour, said Prof John Cryan, who led the study with Prof Ted Dinan.

“We are quite excited this may be a dietary way to deal with stress and anxiety in the future,” he said.

Prebiotics are food ingredients that boost the growth of beneficial gut bacteria.

The team decided to test two promising candidates called Fos and Gos both individually and in tandem to see if they could reduce chronic stress and anxiety in mice.

Fos and Gos are found in a range of foods rich in fibre including green veg, legumes, beans and Jerusalem artichokes, said Prof Cryan, who is an investigator in the Science Foundation Ireland-funded institute and also chair of University College Cork’s department of anatomy and neuroscience.

If you eat the right mix of foods you can influence what bacteria are active in the gut with the help of the prebiotics.

These bacteria in turn produce substances that in these tests were shown to knock down stress and anxiety, he said.

“I was blown away by the extent of the findings, particularly the combination of the two together that were having marked effects,” Prof Cryan said.

“We could see changes in different gene expression relevant to stress in the brain.”

It is not about eating one particular vegetable it is about structuring the entire diet in a particular way and allowing the prebiotics to do their work.

Details of the research were published on Tuesday morning in the journal Biological Psychiatry.

“It reinforces the links between diet and food. These are diet-derived substances,” he said.

“If such robust findings could be translated to humans we may have a whole new ‘psychobiotic’ way of managing stress-related disorders such as depression and anxiety disorders,” Prof Cryan said.

It supports the axiom proposed by Hippocrates who said, “Let food be thy medicine”.

The team is hoping to set up a human trial as soon as possible to assess which prebiotic alone or in combination might provide the best stress-reducing results.

Prebiotics are already used in the infant formula industry so they are well studied, he said.

1 Funeral of John Hume hears peacemaker ‘gave dignity and life to so many people’
2 Irish in Canary Islands: Life has changed dramatically
3 Fresh investigation into the murder of Michaela McAreavey in Mauritius
4 NPHET calls for ban on non-essential travel from countries with high Covid-19 rates
5 Restaurateurs say new 11pm closing time is ‘a body blow’ to sector
Real news has value SUBSCRIBE