‘We hope to begin by printing organs that are alive and can be implanted into animals, to help us work towards one day being able to print new hearts’ 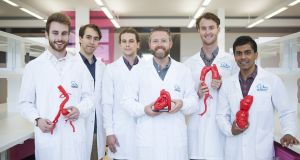 Dr Barry Doyle: front centre, with colleagues from the Vascular Engineering Laboratory at the University of Western Australia 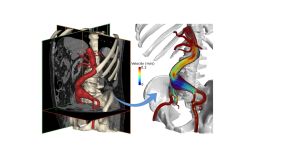 ‘We are using 3D bioprinting to try and print living tissue’

Cardiovascular disease is the most common cause of death in Ireland, according to the Irish Heart Foundation, responsible for one in three of all deaths. Irish researcher Dr Barry Doyle is trying to understand this disease and help create new ways to treat it.

Dr Doyle established the Vascular Engineering Laboratory at the University of Western Australia in May, 2014. The lab currently has a large range of projects under way, and some of the most exciting ones relate to 3D bioprinting.

“[We] are using 3D bioprinting to try [and] print living tissue,” Dr Doyle says. “This uses liquid materials with cells mixed inside to 3D print structures. So we hope to begin by printing organs that are alive and can be implanted into animals, to help us work towards one day being able to print new hearts.”

This, however, may be a long way off. “It is still early days,” he says.

“We are currently working on developing our materials – bioinks – so that we can work towards full organs. For instance, a group of my students are about to start a project to print aortic valves. But we are even a long way off being ready to implant bioprinted structures into animals.”

Dr Doyle studied biomedical engineering at Cork Institute of Technology. “I loved the idea of designing new things that could help save lives,” he says.

His final undergraduate year project was aimed at helping to treat internal bleeding. “This project was a total game-changer for me. I quickly fell in love with research and was given great opportunities,” Dr Doyle says.

He then applied to do a PhD at the University of Limerick, to continue working on cardiovascular disease. “It was my PhD that introduced me to aneurysms and I haven’t stopped since,” he says. “It was easy to get inspired and strive for a career in academia, doing what I love.”

Also at this time, he met his wife, born in Perth but raised in Ireland. Dr Doyle finished his PhD in 2009 and looked around for opportunities to continue his research. He first landed a position at the University of Edinburgh, where he worked with “incredible people from a wide range of academic backgrounds and diverse expertise”.

After two years in Edinburgh, though, Dr Doyle and his wife were up for a change. “We both liked the idea of living in sunshine, so I looked into the career opportunities in Australia. I then received a Fellowship offer from the University of Western Australia, and things have gone great ever since.”

“We try to predict which patients are at risk of having a heart attack. We do this by creating 3D reconstructions of people’s arteries from medical images and using patient-specific computational modelling to determine how the blood is flowing through these vessels.”

Dr Doyle and his team hope to create software tools that are simple enough to be used in a hospital setting, so that doctors can get an indication of the risk. He stresses that the software needs to be intuitive and quick to generate results, otherwise doctors may be reluctant to use it.

“We are also very actively developing . . . software for aneurysm risk assessment, ” Dr Doyle says. “An aneurysm is a ballooning of an artery that can keep expanding until it ruptures.”

Aneurysms are quite common among the elderly. “What is alarming about aortic aneurysms is that they typically do not show symptoms, and are often found accidentally.

“If the size of the aneurysm is bigger than about 5cm in diameter, the patient will usually be offered surgery. However, many of these aneurysms will never rupture and smaller ones can also burst. So not only would a better way of predicting which cases will rupture help save lives, but it will also perhaps spare people from unnecessary operations and have huge cost savings to the health system.”

Part of Dr Boyle’s research involves work with Experimental Phantoms. These are 3D models of aortic aneurysms based on actual patient CT scans.

The “phantom” has the same shape as the patient aneurysm and can be built using a 3D printer and a range of materials, to a thinness of 16 micrometres, about five times thinner than an average hair’s breadth.

Once printed, the “phantom” can be evaluated using different techniques to determine whether it is likely to tear and where.

Normally doctors follow up an aneurysm by imaging and decide whether to operate on it based on its size and the rate at which it increases. However, aneurysms can rupture even when they are small, while large ones can remain stable for years without causing problems.

Doctors could predict much more accurately what will happen to the aneurysm if they knew how much pressure the vessel wall is under, information that these “phantom” models can provide.

To do so, they must be built with thin and flexible material, just like the real vessel would be. But they would also have to be firm enough to faithfully reproduce the shape of the aneurysm from patient imaging. The material should also be waterproof so that fluids can be passed through it and their flow studied.

Finally, it is also very useful that the material is transparent or at least translucent, to improve the chances of finding out exactly what happens inside the vessel.