Irish research may lead to new way of attacking viruses 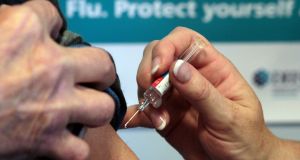 The substance is so important that without it you could not fight the flu virus. Photograph: David Cheskin/PA Wire

Scientists in Dublin have discovered that a biochemical important for cell growth also has a major role in fighting viral infections. The substance is so important that without it you could not fight the flu virus.

The discovery could open up the possibility of developing a completely new way of attacking viruses such as influenza and emerging infections caused by Sars, Ebola and other organisms.

The work at Trinity College Dublin is led by Prof Nigel Stevenson, an assistant professor in immunology. He and his team studied a substance called Stat3, which is important in supporting cell growth.

He found in earlier research that the Hepatitis C virus degraded Stat3 and he wondered why a growth biochemical should be targeted by the virus.

This led to the discovery of Stat3’s role in blocking the immune system attack on difficult-to-treat viruses.

Viral infections immediately trigger the release of Interferon, which in turn switches on the powerful immune response. This involves hundreds of steps and a complex release of antiviral substances that are supposed to kill off the invading virus.

Prof Stevenson believes that the shutting down of Stat3 effectively halts the immune response.

The virus degrades Stat3, but this opens up the possibility of developing ways to restore Stat3 and bring the immune system fully back on line.

“If we can target the virus you could potentially inhibit its blockade of interferon,” Prof Stevenson said. “If you can restore Stat3, then you can potentially restore antiviral genes that are lost when Stat3 is degraded.”

Details of the research are published on Thursday in the journal Cellular and Molecular Life Sciences.

“We have known for a long time that Stat3 is essential for healthy cell growth, Prof Stevenson said. “But our new revelation identifies it for the first time as an essential anti-viral component in the Interferon-signalling pathway. In fact, we found that without Stat3, cells cannot fight the common flu virus or the Pox vaccinia virus.”

1 ‘When I look at the viral loads we find in elderly people, it is mind boggling’
2 Chief medical officer urges people not to visit hardware stores
3 Republic’s Coronavirus death toll rises by 28 as confirmed cases up by 500
4 Doctors sent to help at Cavan hospital after up to 70 staff infected with coronavirus
5 Coronavirus: Simon Harris expects restrictions to stay in place for weeks
Real news has value SUBSCRIBE

Impact of coronavirus ‘overwhelming’ in Republic but for public-health controls 21:27
Devastating effects of pandemic restrictions on priests outlined by Catholic Primate 21:25
Gardaí seize quantity of cigarettes at Covid-19 checkpoint 21:08
Report floats proposal that no-one should serve time in prison for Troubles killings 21:00
Ombudsman calls for ‘urgent clarity’ on State examinations 20:52