Moonshots, making and mazes – Festival of Curiosity set to inspire 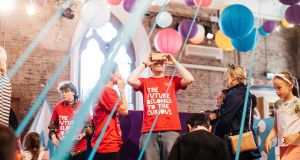 If you were going to put on a festival about curiosity and exploration, when better to do it than around the 50th anniversary of the first moonwalk? “It’s almost like we planned it,” says Vince McCarthy, co-founder and chief executive of the Festival of Curiosity, which take places in Dublin next week.

The festival is now in its seventh year but the July timing worked perfectly to tie in with celebrations of Apollo 11 and three humans landing on the moon in July 1969, McCarthy says. “Our approach to the moon landing is to look back at the energy and vision it took to achieve it, but also to look at what is coming up, what will become the ‘moonshots’ of the future.”

The four-day festival, which explores science, art, design and technology, boasts an impressive line-up of speakers. They include chemist and former Nasa astronaut Cady Coleman, who spent time aboard the International Space Station, palaeontologist and dinosaur expert Jack Horner, who advised on the Jurassic Park films and National Geographic explorer and marine biologist Tierney Thys, who will speak about her studies of the ocean and how spending time in nature can affect mood and body.

There will be plenty to flex the muscles and excite the senses, including a “vertical dance” workshop that helps you train like an astronaut with Ria Murphy of Aerial Cirque and Dr Niamh Shaw, a sensory garden trail at Chester Beatty Library and an “edible science show” with Stefan Gates.

While many of the events are already at capacity, others are non-ticketed and you can drop in at will. One of the most popular such events each year at the festival is Dublin Maker, a day-long celebration of making at Merrion Square.

The community-run event is a hit with visitors of all ages and will this year feature a 1980s-style amusement arcade, embroidery, woodturning, computer coding, costumes, lasers, jellyfish, 3D-printing, EIRSAT-1 (Ireland’s first satellite) and a “periodic maze”, where your knowledge of chemistry could help you to escape.

The maze is a puzzle where you have been apprenticed to a brilliant, secret scientist and your job is to crack chemical codes and figure out who the scientist is so you can escape the maze. “It’s a riff on the Crystal Maze – the apprentice scientists have to use pages from the secret scientist’s lab notebook to work out the correct test tubes and chemical formula via the periodic table, and this will unlock the secret scientist’s identity,” says Dr Claire Murray, a scientist at the Diamond Light Source (the UK’s synchrotron), who developed the maze with fellow chemist Dr Matt Dunstan.

“With 2019 [marking] 150 years of Mendeleev’s periodic table, an ‘escape room’ built around this seemed an obvious thing to try,” she adds.

The Festival of Curiosity takes place at various venues around Dublin between July 18th and 21st. A day-long conference called Future/Island will precede it on July 17th to discuss the future of work, play and learning. To find out more about events and to book tickets, see festivalofcuriosity.ie.

Dublin Maker takes place on July 20th between 10am and 6pm at Merrion Square, it is free and no booking is needed. See www.dublinmaker.ie