Apollo 11 anniversary to be marked with events around the country

DIAS, Festival of Curiosity and Birr Castle to celebrate moon landing with series of events 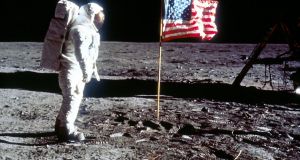 Astronaut Edwin ‘Buzz’ Aldrin poses next to the US flag on July 20th, 1969 on the moon during the Apollo 11 mission. Photograph: NASA/Liaison

The world will soon salute the day a human first walked on the moon 50 years ago on July 20th, 1969. Many events will be held in Ireland to acknowledge the remarkable achievement and to honour strong Irish connections with the Apollo 11 mission.

Dublin Institute for Advanced Studies (DIAS), the leading space research facility in Ireland, has launched a programme of events throughout July to highlight those links. One of its leading researchers, now emeritus professor Denis O’Sullivan, became one of the first people in the world to handle and assess lunar material brought back to Earth by the Apollo 11 astronauts.

Summer Night Stargazing takes place at DIAS Dunsink Observatory on July 19th from 9pm to 11pm. Part of the Festival of Curiosity, it will include talks about DIAS’s role in the Apollo 11 missions - a guided tour of Grubb’s heritage South Telescope and, weather permitting, live stargazing.

On Saturday July 20th, DIAS head of astronomy and astrophysics Prof Peter Gallagher, will join a panel of special guests at a special live RTÉ television recording at Blackrock Castle Observatory in Cork. The observatory is also hosting a series of events in memory of the achievement – details at https://www.bco.ie/events/.

On July 25th, as part the International Cosmic Ray Conference in Wisconsin, US, the 2019 O’Ceallaigh Medal will be presented to Prof Piergiorgio Picozza by by former head of astronomy and astrophysics at DIAS Prof Luke Drury. The medal commemorates astrophysicist Cormac O’Ceallaigh who initiated work on solid state track detectors that led to DIAS involvement with Apollo missions and subsequent space experiments.

DIAS has also installed specially-designed window graphics detailing its leading role in space research over the past 50 years including its contribution to Apollo missions. The designs cover 10 of the windows of its main building on Burlington Road. It has conducted extensive ground-based observations, as well as 18 experiments in space.

“We have been pioneers in space research for many years now. DIAS professor emeritus Denis O’Sullivan was involved in studying moon rocks as part of the Apollo 11 mission, and was one of the first people in the world ever to handle the lunar material,” Prof Gallagher said.

Prof Drury added: “I have worked alongside Denis O’Sullivan at DIAS for many years, and it has always been fascinating to hear him speak of his connection to the Apollo missions. It is fantastic that we had a part in such historic events, and that DIAS continues to lead the way in space research in Ireland today.”

The 50th anniversary of the moon landing is of particular relevance to Birr Castle Science Centre, the home of astronomy in Ireland. While in the 1800s Birr hosted the largest telescope in the world, the Rosse family who live there have also had direct links to lunar research in more recent decades.

There is a crater on the moon named in honour of the family, which was photographed by Apollo 11 astronauts, and acknowledged in a letter sent to the family by Neil Armstrong, the first human to set foot on the moon.

Birr Castle will be celebrating the anniversary with a STAR BBQ on July 20th, followed by the showing of the moon landing broadcast directly on to the telescope and star gazing in the shadow of its great telescope. Tickets can be booked from https://birrcastle.com/events/.

Apollo 11 will feature at a number of events in this year’s Festival of Curiosity which takes place at various venues around Dublin between July 18th and 21st. The main Apollo 11 event – Moonshots of the 21st Century– takes place on Friday, July 19th (7.30pm) at the O’Reilly Theatre. It will look back at the energy and vision behind the landing, but also consider “moonshots” of the future – details at festivalofcuriosity.ie.