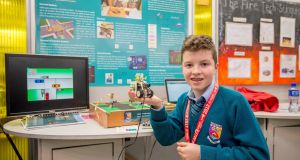 Most drivers would welcome any progress in making traffic lights change faster, and an exhibitor at the BT Young Scientist and Technology Exhibition believes he can make this happen.

Liam O’Mara (13), a first-year student from Castletroy College in Limerick, developed an intelligent traffic light sensor that can move drivers through lights more quickly without compromising on safety.

“It is all about getting traffic through the intersection faster,” he said. “The current system is all about time and you could be waiting 20 seconds even if there was no other traffic.”

He found a better way based on the concept “first come, first served”. “Which ever car is closest to the intersection gets priority,” he explains.

He developed a working prototype based on use of a programmable Arduino electronics board to give the controller “intelligence” and mounted simpler boards on his system’s “cars”. Sensors were added to pinpoint where the cars are.

He would like to develop this by adding GPS. “It would be useful to have GPS because you would know where the other cars are, even around a bend,” he said.

Proof that you can’t beat the variety at the exhibition comes from two first-year exhibitors from Coláiste Mhuire Co-Ed in Tipperary.

“We got the idea when a teacher was getting her chimney fixed,” explained Rebecca. The person carrying out the repair added dung to the mix and the two students decided to see what effect it might have.

They discovered that adding dung made the concrete much more breathable, allowing more moisture to pass through, but the dung blocks were only one-seventh as tough as regular concrete.

This, however, could be overcome if the mix was used as a mortar to cement ordinary blocks together, Rebecca said. “It can be used in the renovation of old buildings.”

The mortar holds its shape when used in this way, Cormac said. It allows old buildings to breathe and lose moisture.

Cormac admitted there was a downside . . . the dung blocks retained a smell that matched the ingredient list. A lick of paint could conceal this, he added.

The blocks were also environmentally sound, given waste from one industry can be reused in another, a form of “industrial ecology”, Cormac said.