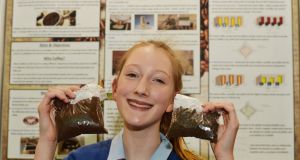 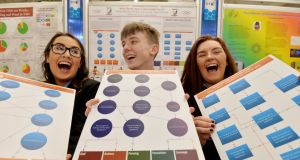 Jennifer Linehan, Fionan Buckley and Grace O’Connor from Millstreet Community School with their project on Which Olympic Sport Is Most Suitable For Me? at this year’s BT Young Scientist and Technology Exhibition. Photograph: Alan Betson

It is like getting something from nothing, turning messy wet coffee grounds into usable energy.

This is a project brought to the BT Young Scientist and Technology Exhibition by Emily Murphy (13) of St Mary’s Secondary School, Mallow. She wanted to work on a “green” project and her research on converting coffee grounds into a fuel source is a classic.

Grounds typically head for landfill, but now represent an energy resource, the first-year student said Wednesday on the opening day of the exhibition.

“As coffee consumption increases in Ireland, it is a useful way to reduce waste and to make a renewable energy source,” she said.

The project involved developing methods to turn soggy grounds into firm pellets and Emily experimented with a number of ingredients and methods for forming dry-fuel pellets, similar to the wood pellets already used as a fuel source.

She also did a lot of statistical analysis to compare her pellets with other pelletised fuels.

She experimented on grounds from three companies, Costa, Bewley and from Frank and Honest, and found that even after drinking the three are not the same. Costa produced grounds with only 10 per cent water, compared to 22 per cent for Bewleys and 16 per cent for Frank and Honest. This meant it was easier for her to air dry the Costa grounds. 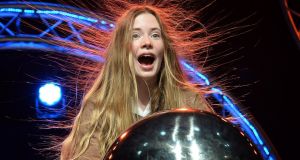 She invented her own calorimeter, a device that measures energy release and developed a recipe that included paraffin wax to form durable, transportable pellets.

“My pellets were better than timber pellets,” she declared, giving off about 10 per cent more heat. “It is an example of green chemistry in action at its best,” she declared.

Simon Leonard, Conor Lavin and Michael Egan were “shocked” at some of the findings from a survey involving senior students in their school, their teachers and also members of the general public.

While the vast majority of respondents knew infertility problems could affect both men and women, there was much confusion over causes of infertility and ways to overcome it.

“The results that came back really opened our eyes,” Michael said. “People are not aware of it and may discover it only after a problem arises.”

People generally didn’t know where to seek help, Simon added. And age did not automatically indicate a better understanding. Teachers were also poorly informed about infertility and its causes, he said.

The students recommended that there should be more class time discussing the issue of fertility, probably during transition year, Conor said.

“People need to find out more and need to talk about it,” he said.

They produced a substantial amount of data on the issue, with results from 106 individuals ranging in age from 16 to more than 50 years old.

Their advice is look for information and seek help if you think there is a problem.