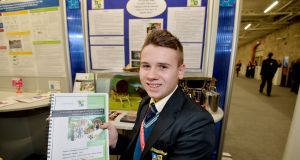 Ian McDonagh from Merlin College with his project on the Cures and Folkways of the Irish Traveller at this Years BT Young Scientist & Technology Exhibition. Photograph: Alan Betson/The Irish Times

The 15-year-old third year student at Merlin College Galway carried out a scientific study of the cures and folkways of the Irish Traveller for presentation at the BT Young Scientist and Technology Exhibition, and catalogued 29 separate remedies that are still in use by Travellers.

“I want to find these old remedies and cures and give them to the HSE to use them. This way there would be less attention on the HSE and more attention on better care for the elderly,” he said.

“It is not good taking tablets. If these were preserved and used, the hospitals would be a lot quieter and people wouldn’t be going bankrupt paying for care or for insurance,” he said.

He put together a survey to assess what cures were still in use amongst the Traveller community and he distributed 300 questionnaires to widely dispersed Traveller groups mainly in Ireland, but also England.

Initially few responses came back. “They were slow to come but we visited them and they spoke to us,” he said. With these direct contacts , phone calls and visits he managed to collect 124 questionnaires with lots of information about what cures were in use and by how many respondents.

There were cures for warts, ring worm, general skin infections and ear and eye infections, he said. Cures for thrush and for diarrhoea were in very regular use.

The cures themselves came via a number of routes, mainly plant material, herbs, oils, flowers and other natural cures. Healers were also regularly used, with a typical healer the seventh son of a seventh son, he said.

“I was surprised they weren’t dying out, they are being kept and used,” Ian said. “But they aren’t getting recorded enough. It is a medical resource that should be kept.”

He plans to present all of his findings to the HSE so it can assess the value of these cures.

Ian is no stranger to the exhibition. He was there last year with a project looking at whether the lunar cycle affected mares when foaling.

And this year’s project has encouraged him to write a book next year in transition year about the cures and folklore with the help of his teacher and with Mary Moriarty a Traveller woman living in Galway.

He also hopes to have another project for the exhibition during TY or when he goes into fifth year. “I want to be back again.”

Ian is proud to represent the Traveller community at the exhibition and is strongly in favour of Travellers being involved in higher education.

“It is good for someone to be standing up for education and wanting to go to third level education. Many young Travellers don’t even like secondary school,” he said.

But Travellers should get more education and learn as much as they can, he believes.