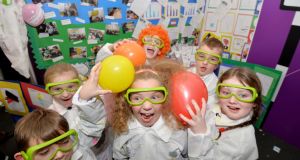 Left-handed people have a chance to shine at the RDS Primary Science Fair, thanks to a research project on whether, with training, someone can become ambidextrous.

The project, from Ballapousta National School, Drogheda, Co Louth, was one of dozens of primary school entries to the fair, which opened on Thursday morning and will run until Saturday afternoon.

The fair is a non-competitive event that aims to promote science, technology, engineering and maths projects undertaken by primary school pupils.

On Thursday, Minister for Education Richard Bruton visited the fair, chatting with the excited fourth-, fifth- and sixth-class pupils as they described their discoveries.

The research projects covered a multitude of subjects, from finding what liquids make your hands go wrinkly to testing what kind of cup keeps a teacher’s coffee warm for the longest period.

Ronan Tallon, a fifth-class pupil at Ballapousta National School, described what he and his class found with their project, “Ambidextrous! Can I train my other hand? That would be handy!”

“We wanted to find out if we could train our non-dominant hand to be as good as our dominant hand,” he explained, alongside his teacher, Louise McGivern.

Girls were also quicker than boys at picking up skills such as cutting with a scissors and catching a ball.

The class put their data into graphs for the fair. They are also offering visitors a chance to test their ambidextrousness.

Daniella Údra, a fifth-class student at Bunscoil Loreto, Gorey, Co Wexford, described what she and her classmates got up to with their project, “Which parachute can land an egg best?” 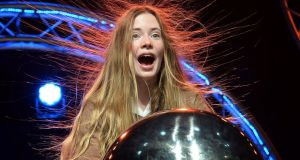 Gallery: Young Scientists at the RDS

The project turned out badly for the eggs, but they were hard-boiled before being tossed off a staircase to test the parachutes so there was very little mess.

The group’s teacher is Claire Thompson.

The class tested square-, round- and octagon-shaped parachutes made of light-weight dishcloths, paper, felt and a plastic bag.

She said the class timed each test and assessed whether the egg passenger had survived the fall.

They found that the best results were with the dishcloth parachute, despite its tiny holes.

William Lin and Danny Howlin were two of the 37 sixth-class pupils from Kilrane National School, Co Wexford, who presented the project, “Can you become a human lie detector?”

Their teachers are Bobby Kenny and Emma Hore.

“We started with a game that we got from a book with five maths questions and five direction questions,” Danny explained.

The project then shifted towards trying to understand how the human brain worked and then by extension whether the class could use the brain to develop a lie detector that could catch a fib.

In the end, the class managed to produce a lie detector using a Hot Wires electronics kit.

Mr Bruton praised the hard work of the pupils, and said they were learning skills that would be important in their future, technological lives.

He noted the fair involved about 7,500 pupils overall and said that he would like to see that number growing every year.

The RDS has run the fair along side the BT Young Scientist and Technology Exhibition for some years, but last year expanded its primary science programme to include a separate event in Limerick.

This year’s Limerick fair will take place next week.

On Thursday, it announced a third location for its primary science programme, in Belfast.

The first Belfast fair will take place this June, said Karen Sheeran, the science and technology programme manager for the RDS.

“There is a huge appetite for it and we are trying to increase access and capacity,” she said.

1 US supreme court rules prosecutor can obtain President Donald Trump’s financial records
2 Donald Trump is an amateur populist – the real trouble is yet to come
3 Mother and five children sleeping in car while seeking accommodation
4 Six counties register no coronavirus case over past week
5 Covid-19: Small minority of pubs putting health of customers and staff ‘at risk’
Real news has value SUBSCRIBE

Garda detective sent forward for trial on charges including threat to kill ex-wife 15:43
Six counties register no coronavirus case over past week 15:26
First ever woman president of an Irish university appointed at University of Limerick 14:58
Varadkar accused of naivety over ‘Covid penalty’ on mortgage holders 14:26
Learner drivers could be forced to take driving lessons to renew permits 13:20