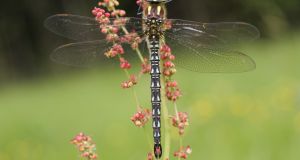 Hairy Dragonfly: Found around clean, still waters such as ponds, lakes, ditches, fens. Usually solitary but groups can be seen in woods early in the season. Photograph: Liam Lysaght 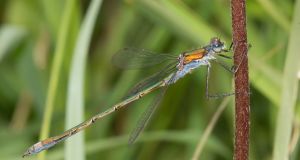 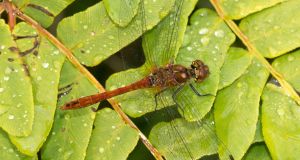 A male Ruddy Darter (Sympetrum sanguineum). Males turn blood red as they mature. This dragonfly is often abundant around turloughs in central Ireland.

Dragonflies are probably the most deadly group of aerial Irish predators. Easily spotted chasing down quarry, these effervescent hunters sport some of the most colourful names too, reminiscent of dragons from Harry Potter.

There’s Irish bluet, black darters, spiketails and river clubtails, as well as the blue emperor. Naturalists, walkers and everyone else are being asked to record their encounters with dragonflies and to have a go at identifying them.

“They are readily noticed, bright and visible and attract people’s attention. With a bit of help its reasonably easy to identify them,” says Dave Wall, citizen science officer at the National Biodiversity Data Centre, who leads an all-Ireland survey of these winged hunters. They catch small gnats and stoneflies, pursued with dazzling aerobatics. Wall says they’ve a strike rate of around 95 per cent once they set their huge compound eyes (with near 360° vision) on prey.

Dragonfly spotting suits fair weather naturalists. An ideal day for them is sunny and warm, with 60 per cent clear sky and minimum temperatures of 15 degrees. Strong wind and rain will usually ground them. “If the sun doesn’t shine, dragonflies are hard to see,” says Dr Brian Nelson, entomologist at National Parks and Wildlife Service and leading dragonfly specialist in Ireland.

There are two dozen resident species in the group (Odonata) in Ireland, 13 being dragonflies and 11 damselflies. Damselflies are smaller, with their eyes set further apart and wings folded back when resting. Dragonflies boast eyes that take up most of their head, and at rest their wings spread out. Numbers here look set to increase, as more species from this tropical group of insects take up residence in Ireland due to increasing summer temperatures.

On the dragon hunt

You never know which species you will encounter. While unemployed after university and living at home in Fermanagh in the 1980s, Nelson got hooked on dragonflies after he made a rare discovery, on his first dragon hunt. “I was living with my parents and I drove up to a lake about two miles from home, and found a really rare dragonfly, the Irish dragonfly. That got me hooked,” he recalls.

There are two ways of taking part in the survey to add to our knowledge of Irish dragonflies. “You can ramble around a lake, stream or bog, or a pond in your own back garden, and simply record what you see,” says Wall. Fill out an online form and, if possible, submit a photo to the Dragonfly Ireland project, which runs until 2024. The big difference from the first all-Ireland survey, carried out 20 years ago, is that almost everyone carries a digital camera on a smartphone. Though sneaking up on dragonflies can be tricky.

Mostly dragonflies hunt close to lakes, ponds, streams and bogs. “The water quality generally has to be quite good to very good for some species, but they also require in-water vegetation or bankside vegetation for laying eggs and for shelter,” says Wall. The second way to participate in the survey is to visit the same site twice in a year, first from April to June, then from July to September, and record what you see.

Dragonfly names often reflect hunting behaviour, with skimmers flying low over water, hawkers chasing down their prey, and darters zooming in from a perch. Nelson says climate change is already impacting our dragonflies. When he began watching them, he would never go out before June, but nowadays a lot of species can be seen in May. There are now also records in October, and even November. New species are expected to arrive here.

Our warming climate has already seen colonists arrive from down south.

“The migrant hawker and emperor dragonfly are two species that have colonised Ireland since the first survey,” says Dr Nelson.

The emperor dragon now ranks as our largest dragonfly and is a tireless flier. They can be seen on lakes and ponds well into September. Arguably, the most-easily observed dragonfly is the four-spotted chaser, which are high speed and noisy fliers.

Dragonflies spend most of their lives as unobtrusive nymphs in waterways. These are small opportunistic, ambush predators, mostly of small invertebrates. After between one and three years, fully grown nymphs climb up onto a perch and at night-time emerge as newly minted dragonflies. Adults can roam far from water, but will return to search for a mate and lay eggs.

As for the damsel that got Dr Nelson hooked, he says “it is not a common species in Europe, doesn’t occur in Britain and it is a bit of a puzzle as to why it is in Ireland.”

Populations on lakes tend to go through booms and busts. “It is a beautiful little damselfly and the one species that on a European level we have an important population of,” says Dr Nelson. There’s time yet to spot and record species in your area and contribute to knowledge of Ireland’s biodiversity.

Four Irish species of dragonfly or damselfly are threatened, though little is known about how most of our species are getting on. “There’s been quite a period since the last assessment and that is part of the reason for this project,” says Dave Wall of Dragonfly Ireland.

Readers can help by going to the biodiversityireland.ie website to upload their dragonfly sightings. Beginners may struggle to distinguish common blues from azure blues and variable damselflies, but there are identification guides and online forums to help. Biodiversity Ireland sell an identification swatch for €6 (including postage) as an aid to would-be dragon and damsel spotters.