In tribute to John Casey, founder of modern geometry 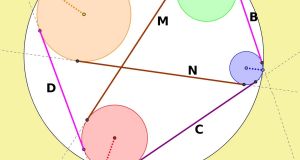 Next Tuesday – May 12th – is the 200th anniversary of the birth of John Casey, a notable Irish geometer. Casey was born in 1820 in Kilbeheny, Co Limerick. He was educated in nearby Mitchelstown, where he showed great aptitude for mathematics and also had a gift for languages. He became a mathematics teacher, first in Tipperary town and later in Kilkenny.

Although having no advanced education, Casey pursued his interests in mathematics in his leisure time. His work came to the attention of George Salmon and Richard Townsend of Trinity College Dublin. They persuaded him to enter Trinity, which he did in 1858. He was elected a scholar in 1861 and graduated the following year.

Casey took a position as science master at Kingstown School (Dún Laoghaire) and continued with his mathematical studies. In 1873, he was appointed professor at the Catholic University in St Stephen’s Green; later reconstituted as University College Dublin. He declined an offer of a chair at Trinity College: being a man of deep religious convictions, he felt obliged to support the development of Catholic education in Ireland.

Casey produced several research papers on geometry while studying at Trinity. In his career, he published more than 20 mathematical papers, many appearing in the Philosophical Transactions of the Royal Society and in the Proceedings of the Royal Irish Academy. He also wrote six textbooks on geometry that were well received and widely used.

In one of these, A Sequel to Euclid, published by Hodges, Figgis & Co in 1881, Casey included extensions to the theorems of Euclid he had discovered in his own research. In consequence, he is regarded as one of the founders of the modern geometry of the triangle and circle.

Some 2000 years ago, the Greek astronomer Claudius Ptolemy established a result in Euclidean geometry: for a quadrilateral inscribed in a circle, the product of the diagonals is equal to the sum of the products of the opposite sides. In symbols, if the sides, in order, are A, B, C and D and the diagonals are M and N, then AC + BD = MN.

This theorem was extended by Casey; he replaced the vertices of the quadrilateral by circles within and tangent to the outer circle, and proved a result for the common tangents that greatly generalised Ptolemy’s theorem.

Another theorem of Casey is important for graphic designers. For four points A, B, C and D in order on a line, with the circles of diameter AC and BD intersecting at point O, the angle BOC is called Casey’s angle. Its importance is that it is a perspective invariant, and this helps artists to produce realistic images and video game designers to achieve verisimilitude.

Casey married in 1847 and had two sons and two daughters. He received many distinctions in recognition of his mathematical work. In 1866, he was elected as a member of the Royal Irish Academy, later serving as its vice-president. In 1875, he was made a fellow of the Royal Society. He was awarded honorary degrees by Dublin University and by the Royal University of Ireland. He died, aged 70 years, in 1891 and is buried in Glasnevin Cemetery.