Coronavirus: What does exponential growth mean? 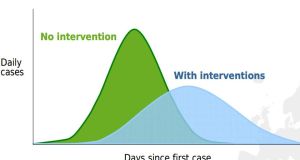 Since the population is finite, and the vast majority of people recover, the graph of the number of infected people is bell-shaped, growing to a maximum and then declining

In its initial stages, the coronavirus pandemic grew at an exponential rate. What does this mean? The number of infected people in a country is growing exponentially if it increases by a fixed multiple R each day: if N people are infected today, then R times N are infected tomorrow. The size of the growth-rate R determines how rapidly the virus is spreading. An example should make this clear.

Suppose that, on day zero, there is one infected person; one is enough to start an epidemic! We assume, for simplicity, that an individual is infective for just one day. Suppose each infected person transmits the virus to two others and then recovers. After one day, there are two infected people, after two days there are four, after three days eight, with the number doubling each day. That is exponential growth, with a doubling time of one day.

From the initial case, the daily infection numbers continue with two, four, eight, 16 and 32. The numbers are small, but not for long. The 10th term is about 1,000 and the 20th term is about a million. Under these (highly simplified) conditions, the entire population of Ireland has been infected within 22 days.

Some of us recall school mathematics lessons on geometric series. Each term of such a series is multiplied by a number R to get the next term. We may even remember a formula for the sum of the first N terms of the series; it involves R raised to the power N, that is, R multiplied by itself N times.

The terms of a geometric series grow exponentially; the power N to which the growth-rate R is raised is called the exponent. If each term is double the one before (so that R = 2) and the first term is 1, then the 10th term is about a thousand and the 20th about a million.

Of course, exponential growth cannot continue indefinitely. Since the population is finite, and the vast majority of people recover, the graph of the number of infected people is bell-shaped, growing to a maximum and then declining.

If the growth-rate R, related to what epidemiologists call R-naught – the basic reproduction number – can be reduced, the bell-shaped curve can be flattened and extended so we can buy time by reducing the peak burden on the health service, and save lives.

The origin of chess

Legend has it that, long ago in the Gupta Empire, a great but greedy mathematician, Grababundel, presented to the Maharaja a new board game that he had devised, called Chaturanga – we call it chess.

The Maharaja was so pleased he asked Grababundel to name his reward, expecting that he would ask for the hand of the crown princess. But no! Grabundel said simply: “Give me one grain of rice for the first square on the board, two for the second, four for the third, and so on; doubling each time until the 64th square.”

This is exponential growth with a vengeance: the total amount of rice is about 18 million million million grains. If a grain is spherical with radius 2mm, the packing density is 3/4, and the rice is stacked in a conical heap of height H and radius H, the total volume of the heap is about 800 cubic kilometres and the height of the cone is 9.3 km, higher than Mount Everest (8,848 m).

1 Helen McEntee holds up well for someone with barely a leg to stand on
2 In Brexit end game, Johnson scours menu of unpalatable choices
3 Restaurants and gastropubs to reopen in December under Government plan
4 Covid-19: Government set to reject advice and approve reopening of gastropubs and restaurants
5 Trump signals White House exit if Biden wins electoral college vote
Real news has value SUBSCRIBE