Houston, we have a problem: the myths of Apollo 13

There was one thing Hollywood got right about the mission: the necessity of experts 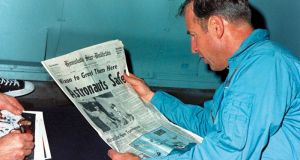 It’s “we’ve had” not “we have”. And it was spoken by Jack Swigert, not Jim Lovell.

I guess we’re all pretty inured to Hollywood making historical mistakes on film. Almost every film that purports to be “based on real events” ends up compressing, altering, amalgamating or otherwise ignoring what actually happened as the needs of the story bend and twist the truths of history. Don’t get me started on U-571.

Apollo 13 was the seventh crewed mission in the Apollo space programme and the third meant to land on the moon. The craft was launched from Kennedy Space Center on April 11th, 1970, but the lunar landing was aborted after an oxygen tank in the service module failed two days into the mission. The crew instead looped around the moon, and returned safely to Earth on April 17th.

In the 1995 film Apollo 13, however, we watched a story told on film that not only took place, in actuality, in the relatively recent past, but one for which there was a wealth of audio and visual evidence, not to mention the book, Lost Moon, written by astronaut Jim Lovell, who ought to know as he was there.

It’s actually command module pilot Jack Swigert who utters the fateful words. Except he didn’t. What he actually said was: “Houston, we’ve had a problem”

So it’s perhaps a little surprising that the key moment in the film, the moment of greatest peril, the moment that gave us the quote everyone remembers and that made it on to the film’s poster, is incorrect. In the film, Tom Hanks, playing Apollo 13 commander Jim Lovell, says – tersely – into the radio microphone: “Houston, we have a problem.” The seriousness and rising panic are obvious in both Hanks’s face and the tone of his voice.

In fact, if you listen back ton the actual Nasa recordings of the radio chatter between Apollo 13 and mission control in Houston, it’s actually command module pilot Jack Swigert (portrayed on film by Kevin Bacon) who utters the fateful words. Except he didn’t. What he actually said was: “Houston, we’ve had a problem.”

In fairness to the scriptwriters, “we’ve had” lacks the dramatic urgency of “we have”, and to have had one of the actors replicate, perfectly, Swigert’s tone in the original transmission might also have undercut the drama – Swigert sounds more confused than panicked, in accordance with The Law of Test Pilot Radio Chatter.

Proposed by Tom Wolfe in his seminal book The Right Stuff, every test pilot and astronaut (and most flyers in general, including those who shuttle us to Heathrow and back) have, since 1947, tried to emulate the casual drawl of the legendary Chuck Yeager, the man who (officially) first broke the sound barrier.

Swigert is, clearly, trying to keep up the “aww-shucks-t’wern’t-nothing” facade that is required of all test pilots, but he’s equally clearly more curious than worried at that point. Bangs and shakes are not uncommon in space flight, but usually are harbingers of only minor issues.

Deep in space, some 330,000km from Earth, Apollo 13 was losing both breathing air and electrical power

Not this time. Although none of the three astronauts on board Apollo 13 at the time (Lovell, Swigert, and lunar module pilot Fred Haise) could see it, one of the spacecraft’s oxygen tanks – vital both for breathing oxygen and, just as importantly, the supply of electricity via 13’s on-board fuel cells – had exploded.

A short in the electrical wiring had sparked during a routine procedure called “stirring”. This switched on fans within the oxygen tanks, which would spin and stir up the oxygen and even out the pressure in the tank. Instead the spark caused a catastrophic detonation, destroying the tank and damaging adjacent tanks. Deep in space, some 330,000km from Earth, Apollo 13 was losing both breathing air and electrical power.

To be fair to Hollywood, a few seconds after Swigert reports the problem, Lovell does come on the air and inform Houston of the explosion, but again he says “we’ve had” not “we have”.

Again, at this point, the film takes a turn away from history. It shows the staff at mission control rushing to come up with solutions to the potentially lethal issues now affecting the spacecraft. It shows anxiety and confusion, which doubtless is true, but it does sidestep the fact that Nasa had trained for this very crisis.

From the start of the moon missions, it had been planned to use the attached lunar module as a lifeboat for the crew should anything happen the command and service module, so while there was certainly concern for the crew, and disappointment that now no moon landing would take place, the procedures were in place and ready to roll. Even the firing of the lunar module’s engine, shown in the film as a make-or-break moment, had been carefully practised and thought out during countless hours of mission simulation on the ground.

In fact, that was true of all of efforts that followed to bring the crew back alive, save for one. The issue of carbon dioxide. In an interview in 2017, Lovell said that the build-up of carbon dioxide, the exhaled breath of the crew, was probably the most dangerous aspect of the rescue effort.

Thankfully, disaster turned to triumph, and it did so because of something we’ve apparently forgotten recently: listening to experts

If carbon dioxide levels had risen too high, the crew could have suffocated, but not before becoming almost insensible from oxygen deprivation. “We were facing all sorts of problems, but the one that really stood out was the danger of carbon dioxide build-up,” Lovell told the Observer. “We had no power. It could have killed us.”

It didn’t because, for the most part, of the efforts of those in mission control. With an average age of 29, and many barely beyond their university graduations, the mission controllers faced an almost hopeless problem; how to rescue a crew that was too far away to rescue.

The jury-rigged apparatus the controllers designed to overcome the carbon dioxide issue was more or less accurately described in the film (it had to create a connection for square carbon dioxide filters from the command module to fit into round filters from the lunar module) and demonstrated above all the one thing Lovell says saved the mission and the men: teamwork.

There’s one final historical inaccuracy: flight director Gene Kranz (played in the film by Ed Harris) never actually said “failure is not an option”. He may have thought it, though, and later took the phrase as the title for his own autobiography.

Not quite a year from the historic first moon landing of Apollo 11, Apollo 13 could have been the space age’s worst disaster – three astronauts adrift in space, condemned to a slow death by asphyxiation, and all captured live on the evening news. Thankfully, disaster turned to triumph, and it did so because of something we’ve apparently forgotten recently: listening to experts.

Apollo 13 was saved because Lovell, Haise, and Swigert were all skilled test pilots and highly trained astronauts, and that’s exactly who you would want in a situation such as that.

More importantly, though, they were able to survive because of the efforts of mission control, the eggheads in short-sleeved shirts, narrow ties and horn-rimmed glasses perpetually wreathed in cigarette smoke.

Not only were the controllers experts in their individual fields, but they were back-stopped by teams of fellow experts, from Nasa engineers to those from aerospace companies such as Grumman and North American Aviation who had designed and built the two conjoined spacecraft.

Listening to experts: it seems to be something we’ve forgotten how to do, in this era of panic and pandemic, of elections carried by the loudest and the louts, of Brexit and Trump. Experts have become derided and disparaged, and shunted off to the sidelines when their views, as is so often the case, depart from the political orthodoxy.

Spinning in space, hundreds of thousands of kilometres from home, with oxygen tanks leaking and their spacecraft losing its ability to keep them alive, Lovell, Swigert, and Haise listened, paid heed and got home safely. Whatever the Hollywood inaccuracies, that was something the film got right, and something to which we should all pay attention.