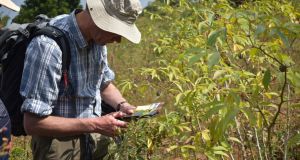 One of the more ominous indicators of climate change in sub-Saharan Africa has been the dramatic recent shifts in rainfall patterns. With rain-fed agriculture crucial for the livelihoods of millions in the region, a better understanding of this is critical to help the most vulnerable to mitigate climate impacts.

UCD’s School of Earth Sciences is involved in a collaboration with Irish-based NGO Self Help Africa (SHA) in examining isotopes from deposits found in caves in southern Africa to assess historic rainfall patterns before the era of written records.

To better understand current rainfall patterns, SHA has also deployed 184 weather stations and seven river-line gauges across Malawi and Zambia. “We are looking at the critical periods in a crop’s growth cycle, in terms of temperature and rainfall, and aiming to change the planting dates so you can avoid these periods,” according to Paul Wagstaff, senior agricultural adviser with SHA.

Although not indigenous to Africa, as with the potato in Ireland, maize has become a staple for many smallholder farmers, and is now favoured over more traditional crops such as sorghum and millet. While maize is productive, its key limitation is a lack of tolerance to high temperatures and drought conditions.

Gathering timely information via rain gauges and other technologies is only half the story. Disseminating this in a timely manner to farmers in remote areas is equally important. Basic mobile phones are an almost universal and vital part of life in Zambia, with a 2012 study finding that adults spend almost 20 per cent of their daily income on phone credit.

A technology company, Viamo, has developed a user-friendly SMS-based messaging system where farmers in the region can dial a number and receive up-to-date information on rainfall in their area, with advice on, for instance, when to plant.

As the system is voice-activated, illiterate farmers can receive recorded instructions in their local language. If a user has a specific problem, such as insects, the low-cost system can quickly guide them to the appropriate information. It also issues severe weather and disease outbreak alerts.

While cheaper mobiles are common in Zambia, Kenya has a greater number of smartphones, and this offers more sophisticated services for farmers. One system, developed in conjunction with Penn State University in the United States, uses an app that employs artificial intelligence to detect viral diseases in cassava. This app integrates with the UN’s Food and Agriculture Organisation remote sensing software which monitors water availability in a given area.

I visited Zambia in late February in the aftermath of the latest severe drought to hit the region to assess the impacts, as well as to see what steps were being taken to mitigate the impacts of climate change in the region.

As a result of ongoing extreme weather conditions, about 2.5 million Zambians are now in receipt of food aid. Among these is Catherine Milambo, who farms in the village of Malalika in Kafue, in southern Zambia. She described how her typical maize harvest would amount to about 15,000kg, but drought conditions have seen this plummet to about 500kg. Her family now receive aid in the form of mealie meal (a coarse flour made from maize) and small amounts of cash.

Another villager, Habeene Mable, explained her concern at the cutting of trees for charcoal, believing it is contributing to the irregular rainfall that now plagues the region. She has begun to plant fruit trees as part of a project to help farmers diversify crops and increase food resilience.

Dennis Mooya, senior agriculture officer with Zambia’s ministry of agriculture, works with local communities in Kafue and surrounding areas to help them cope with the tough new conditions. “Thirty years ago, we all knew that by the time it was [Zambian] independence day on October 24th, the rainy season would have started, but now it’s after November 15th before you have the first planting rains.”

This loss of almost a month in the traditional rainy season has a major impact on rural smallholders dependent on rain-fed agriculture, he acknowledges. “I think we need to awaken to the fact that we have a problem, a climate-related challenge,” Mooya adds. “Now, let’s ask ourselves what if it doesn’t rain completely – what are you going to eat?”

He points out that 70 per cent of the food produced in Zambia is grown by smallholders. “We need to start thinking about smart agriculture and water-harvesting technologies for these farmers.”

Climate stresses are being exacerbated by unsustainable practices, such as indiscriminate ploughing and land clearance for crops, unmonitored grazing by farm animals and excessive monocropping, according to Wallace Benn, environmental officer in Kafue. Concerted efforts to introduce conservation agriculture techniques are ongoing. These include no-till planting and maintaining almost total soil cover to prevent it drying out.

Benn is deeply concerned at rising temperatures and dramatic shifts in rainfall. “Now, with the whole climate change scenario, everything is falling apart. We even have situations where people are migrating within the country to do something with their lives other than agriculture,” he adds.

“The western world is trying to dedicate resources more to (climate) mitigation – we understand this urgency, but the urgency in developing countries is not mitigation, it’s in adaptation,” says Carol Mwape Zulu, chief climate change officer in the ministry of lands.

“Our livelihoods are impacted and the infrastructure, the little that is there, is getting damaged. It’s drawing development back,” says Mwape Zulu, who is based in the capital, Lusaka. Dedicating more resources towards adaptation, she believes “would be a fair response by the western world towards assisting developing countries”.

In its formal submission to the 2015 Paris agreement on climate change, Zambia projected climate-driven GDP reductions in the coming decades as a result of declining agricultural activity “and its associated effects on poverty levels, the potential impact of an energy crisis, the higher cost of treating climate-related diseases, and the loss of natural resources”.

South of Lusaka is the Kariba dam, a vast hydroelectric station capable of producing 25 times more power than Ireland’s Ardnacrusha plant, and source of about half the electrical needs of both Zambia and neighbouring Zimbabwe. The dam is fed by lake Kariba, the world’s largest artificial lake. Despite its huge size, the lake has dropped by about six metres in the past three years, leading to frequent power cuts in both countries.

It is deeply ironic that a clean electricity source in a country with extremely low CO2 emissions (Zambians produce 0.29 tons of CO2 per capita, or 40 times less than the average Irish person) should be severely impacted by the climate-heating effect of emissions produced in the “developed” world.

Another indirect climate impact is that Zambia is now experiencing rapid deforestation, with more than 270,000 hectares being lost annually. Much of this is as a result of farmers cutting trees to produce charcoal to try to offset income losses due to drought and flood damage. The frequent power cuts make charcoal popular in the cities as a reliable material for cooking. Charcoal sellers now line almost every roadside in rural Zambia.

Since the western world has so far failed to act to rein in emissions, mean annual temperatures in Zambia are, according to Irish Aid, projected to rise by a further 1.2 to 3.4 degrees by mid-century. This, even before the impacts of coronavirus are taken into account, paves the way to a dangerously uncertain future.