Lessons to be learned from Covid-19 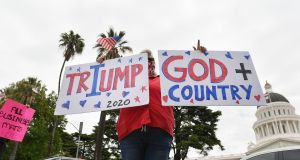 Where the US might once have led the world in a time of crisis, the reaction of the Trump administration to Covid-19 has been farcical from the outset. Photograph: Josh Edelson/AFP via Getty

For scientists, environmentalists and others concerned with the issue of climate change, the Covid-19 crisis has provided many insights into the way our societies deal with a global threat.

The most striking observation is that it is clear humans can change their social behaviour, rapidly and decisively, if necessary. On the news every evening, we see pictures of deserted city centres around the world, images that would have been inconceivable just a few months ago. Of course, changes in social behaviour have occurred before, from drink-driving to smoking, but the pace and scale of the onset of social distancing has been of a different order.

A less positive observation is that the reaction to the Covid-19 crisis occurred at national, rather than international, level. Where one might have expected action to be coordinated by global organisations such as the United Nations or the World Health Organisation, each nation set its own policy, with little interaction from other countries – even for the case of member states of the European Union.

This led to a wide variety of reactions to the crisis. Some countries (including Ireland) intervened early, closing schools and businesses and enforcing social isolation before the virus took hold, despite the economic cost. In other countries, particularly those with a strong attachment to free-market ideology (such as the US and the UK), intervention came much later.

So far, it seems that the first group of countries got it right. Early intervention appears to have been effective in slowing the rate of infection, helping to avoid national health services being overwhelmed.

Meanwhile, countries that delayed are finding it much more difficult to “bend the curve”. It’s hard to avoid the conclusion that governments that let science take precedence over politics and economics from the very beginning fared better.

That said, most nations followed the advice of their scientists at least to some degree. This was matched by a widespread public acceptance of science-based directives from government on social isolation.

To be sure, one encounters the odd conspiracy theory on social media but there hasn’t been any great “Covid-19 debate”, ie nightly disputes in the media between epidemiologists and commentators with no expertise in the subject.

It seems that in the face of this crisis, most people are happy to defer to experts, contrary to that infamous statement by Brexiteer Michael Gove. In a time of real crisis, the general population have found a new respect for scientific expertise.

Indeed, it has been quite amusing to witness some of the most virulent British tabloids castigating their government for not following scientific expertise closely enough. These same tabloids have long given a platform to contrarian views on global warming, creating a false impression of a debate that simply doesn’t exist in scientific circles. It seems that science is to be trusted in at least some spheres.

However, the United States has marked a striking exception to this pattern. Where the US might once have led the world in a time of crisis, the reaction of the Trump administration to Covid-19 has been farcical from the outset. Having initially dismissed the crisis as a hoax perpetrated by political enemies, the president then lurched from one daft opinion to another, all the while installing family members and political cronies in key positions to address the crisis.

This approach was mirrored by his favourite TV station, Fox News, which featured daily commentary from “experts” who knew nothing about the subject. The outcome was a comprehensive failure to take meaningful action in good time, resulting in a very high rate of infection in some of the largest cities in the world.

The failure of the US to act decisively in the face of a global threat is deeply worrying. As in the case of climate change, there seems to be a deep unwillingness to listen to the experts and take appropriate action. The implications for our climate are grave.

After all, the Covid-19 crisis has a finite timeline as the virus moves through the population and vaccines are eventually developed. By contrast, carbon emissions will continue to rise in the long-term, with catastrophic consequences, unless drastic action is taken.

In a rational world, one positive outcome of the Covid-19 crisis could be a widespread rejection of politicians and media outlets who allowed politics and uninformed opinion to take precedence over science – scientists, science communicators and journalists should do their best to ensure that this lesson is learned.

Dr Cormac O’Raifeartaigh lectures in physics at Waterford Institute of Technology – and blogs at antimatter.ie