Assessing the eruption threat is a complicated business, with fluids, gases, stresses and rock strengths among the many variables 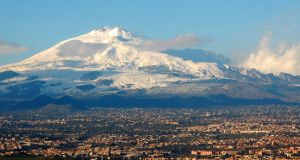 Volcanoes such as Etna have become tourist attractions, with visitors prepared to take more chances to get near the summit than locals 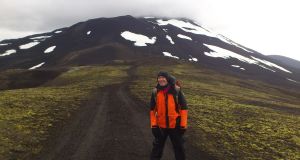 Prof Chris Bean at Hekla in Iceland. Volcanoes are central to Icelandic life, as they provide heat and electricity and draw tourists 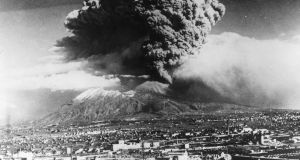 A cloud of ash hangs over Vesuvius during its worst eruption in more than 70 years. In the foreground is the city of Naples. The nearby towns of Massa and San Sebastiano were destroyed by the flow of lava. Photograph: Keystone/Getty 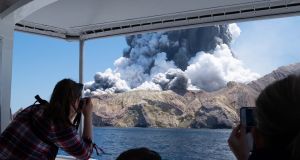 Volcanoes have erupted without warning and killed people living on, or near them, since the dawn of human history. The Vesuvius eruption of AD 79 killed at least 1,000 people, while the 1815 Tambora eruption in Indonesia had a global impact causing a “year without a summer” and killed 80,000.

There are no volcanoes directly threatening Ireland, but eruptions can still impact on us here. For example, the April 2010 eruption of the Icelandic volcano Eyjafjallajökull, caused disruption to air travel across Europe.

This could happen again, as prevailing west to east winds means that any large eruption in Iceland – 880km to the northwest – will carry ash over Ireland.

The world’s 20 or so super-volcanoes in places such as Yellowstone, US; Toba, Indonesia; and Rabaul, Papua New Guinea are a threat to all life on Earth through their ability to cause rapid climate change. These monsters don’t have a visible cone. It’s been blown right off by during the last eruption. In its place there’ s a caldera, or crater, left after the magma all vented out.

Chris Bean, professor of geophysics at Dublin Institute for Advanced Studies (DIAS), uses seismometres and sensors to measure earthquakes, large and small. The signals help him to read the pulse of an volcano and forecast for eruptions in a manner similar to how a cardiologist looks at a cardiogram in order to check for heart attack risk.

“There are long whistles, staccato signals – a whole range of signals – that the earth sends once a volcano starts to growl and become active,” Bean says. “We are developing theoretical and computer models, and using field experiments to get us a better warning when volcanoes will erupt.”

Italy and Iceland are two countries famous for their volcanoes. Bean and his fellow researchers have installed sensors around some of their most famous peaks. The data from the sensors feed into volcano forecasting.

Dr Laura Sandri of the National Institute of Geophysics and Volcanology in Rome lives in the shadow of some of world’s most dangerous volcanoes, including Vesuvius and Campi Flegrei – Europe’s only super-volcano. Flegrei which 35km to the west of Naples and has been showing signs of activity.

Sandri and Bean have worked together since 2004. In Italy, which is home to some of the highest risk volcanoes on the Earth, Sandri says, this is important work. He explains the difference between predicting and forecasting eruptions by comparing a shooting bullet and a rolling dice.

“It is easy to predict where the bullet will land and in what time, whereas rolling the dice is more unpredictable. There is the initial roll of the dice; how high it goes and what’s its speed? Volcanoes are more like a dice.”

The uplift of land around Campi Flegrei in recent years has caused concern that magma might be on the move up from deep up towards the surface – which can be a prelude to eruption.

The lives of 400,000 people living inside Flegrei’s caldera depend on forecasting precision, as these people must all be moved a few days before an eruption happens.

Scientists are struggling to distinguish seismic signals for large, or “super eruptions”. However, even if researchers could predict a super eruption, the evacuation plans for Naples are not designed to cope with one. Fortunately, mega super eruptions at Flegri occur only about every 13,000 years or so.

Geologists say that while Vesuvius remains active – and a threat – the large volcanic complex at Campi Flegrei is a far more immediate and dangerous threat due to the uplifts of ground measured there in recent years. Such uplifts can often be a sign of magma moving up from deep to the surface.

Volcano forecasters do not like to use the word prediction, as they say that science cannot predict precisely when a volcano will erupt, where and with what strength. The situation is like weather forecasting, they say, where science forecasts the probability of what might happen over time.

And scientists fear the consequences of making a false forecast triggering an evacuation plan for Naples. “If you have forecasts that are not viable, people lose faith in your ability to inform them what’s happening,” Bean says. “That’s more dangerous as people will tend not to move next time.”

Magnús Tumi Gudmundsson, professor of geophysics at the Institute of Earth Sciences at the University of Iceland, works closely with Bean on volcano forecasting. Volcanoes are central to Icelandic life, Gudmunsson says, as they provide heat and electricity and draw tourists.

Iceland, sits on the mid Atlantic ridge, running down the middle of the ocean between Europe and North America, which emerged out of the north Atlantic during repeated eruptions 18 to 20 million years ago.

Today it has about 30 volcanic systems, with one big central volcano connected through stretches of cracks and faults in the rock that extend out 80 to 100km.

In Iceland, despite 24-hour monitoring, scientists might only see clear signals of an eruption 30 minutes in advance. The seismometres set up by Prof Bean in Iceland pick up earth-shaking signals before, during and after the event. This data can help scientists to pick out the earliest eruption signals.

“This is our ear on the ground,” Gudmundsson says. “Automatic systems determine where the earthquake happened and how big it was, and that allows get information in real time. That is very important.”

Scientists love data. The more data they can get hold of, the more they can see patterns and make forecasts of what might happen. Yet, when it comes to erupting volcanoes data is hard to come by. This is because active volcanoes such as Vesuvius might only have a major eruption every 2,000 years.

To better forecast eruptions it makes sense to study volcanoes that produce a lot of data during the pre-eruption phase. The Mount Etna volcano near Catania in Sicily fits the bill.

“It is in eruption quite often; there are regular eruptions,” Bean points out. “It is not as dangerous as Vesuvius but it could impact the town of Catania, so it’s closely monitored.”

Volcanoes such as Etna have become tourist attractions, Bean says, with visitors prepared to take more chances to get near the summit than locals. The tourists bring in money to the local economy, so there is a fine line for the authorities to draw between public safety and promoting tourism.

Etna, like Vesuvius, is on a 24-hour watch. This happens in a control room, which resembles an air traffic control scenario, with lots of screens and data constantly flowing in from the volcano.

There are protocols agreed well in advance by scientists about when to move up the alert levels, when parts of the volcano need to be closed to the public, and when to evacuate people.

Assessing the eruption threat is a complicated business, Bean says, with fluids, gases, stresses and rock strengths among the many variables. “It is very hard to say, well if we put this amount of gas in, then this failure will occur. It is not like dealing with human engineered materials,” he adds.

Another issue is that forecasts are built around the likely possibility of what might happen. They do not factor in the chance that a real event – an eruption – might occur that is bigger than the probable forecasts, and that it kills somebody, such as a tourist. This makes forecasters very cautious.

There is debate about where volcano forecasting science is headed. One school aims to better understand the physics of eruptions, and to run ever better computer simulations of eruptions using that knowledge.

Another group is focused on getting more data from eruptions, and using artificial intelligence and machine learning to recognise eruption signals in the data.

The best way forward, Bean believes, may be a combination of machine learning with physics – a hybrid approach. “The idea is to use some simulated data to train the AI systems to try and understand how the volcano will behave under a range of conditions. This is pattern recognition with physics.”

Millions of lives there depend on an accurate five-day eruption forecast, but forecasting eruptions is even harder than forecasting the weather.

“With the weather, you can see the storm coming on the satellite image,” Bean notes. “We don’t have that luxury. You might have something that looks like it’s going to erupt then somehow quietens down.”