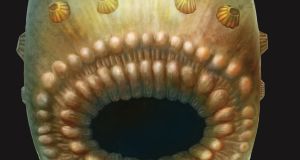 It might have a face only a mother could love but this bag-like sea creature ranks as our earliest known human ancestor.

It looks fearsome but in fact probably measured no more than a millimetre across. Even so it lies on the evolutionary pathway that wended its way through time eventually to deliver modern humans.

The artist’s reconstruction of the creature, Saccorhytus coronarius, is based on 540 million year old fossils discovered in Shaanxi Province in central China.

The international team from Cambridge in the UK and Northwest University in Xían and with support from other groups in China and Germany placed the diminutive sea monster in the deuterostome family line.

This is a grouping of various later biological categories, one of which includes creatures with a backbone, a characteristic of our own species, Homo sapien.

If they are correct then the sea creature represents the earliest evolutionary step yet discovered in the long march to humankind.

At a millimetre across it might have been easily missed were it not for their exceptionally good fossil preservation, with the organism very clearly displayed in the stone.

To the eye they look like black grains but under the microscope “the level of detail is jaw-dropping”, said Simon Conway Morris, professor of evolutionary palaeobiology of St John’s College, Cambridge.

S coronarius should be able to provide “remarkable insights into the very first stages of the evolution of a group that led to the fish, and ultimately to us”, said Degan Shu from Northwest University.

Details of their work were published on Monday in the journal Nature.

One curiosity they highlight is the creature had a large mouth but no anus for the discharge of waste. They speculate that it must have discharged the waste back through the mouth, “which from our perspective sounds rather unappealing”, said Prof Conway Morris.

Previously studied deuterostomes are from much later, 510 to 520 million years ago when they had already started to diversify into different emerging species, for example star fish and sea squirts.

This find takes it back another 20 to 30 million years before the later diversification. “All deuterostomes had a common ancestor, and we think that is what we are looking at here,” said Prof Conway Morris.

The team smashed its way through three tonnes of limestone to isolate the fossils it needed to do the study.