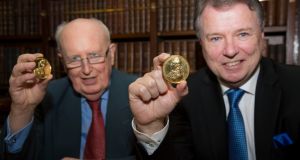 Receiving their Royal Irish Academy gold medals on Tuesday were Louis Cullen (left), professor emeritus in history at Trinity College Dublin, and Fergus Shanahan, professor and chairman of the department of medicine at University College Cork and director of the APC Microbiome Institute. Photograph: Johnny Bambury

Research professors from Trinity College Dublin and from University College Cork were presented with gold medal awards from the Royal Irish Academy on Tuesday in recognition of their achievements in the humanities and in the life sciences.

Louis Cullen is professor emeritus of history at Trinity, whose work has focused on a number of areas including modern Irish economic and social history, pre-modern Japanese history and Franco-Irish history. He is recognised as a leading international authority on the Tokugawa period in Japan from about 1600-1860.

Fergus Shanahan is professor and chair of the department of medicine and director of the APC Microbiome Institute at UCC. He has helped the institute achieve world standing in how the mix of bacteria in the human gut can influence biological activity, even to the point of affecting mood. Science Foundation Ireland named him researcher of the year in 2013.

Minister of Education and Skills Richard Bruton delivered an address and congratulated the medal winners. President of the academy Prof Mary E Daly presented the medals. Also in attendance were the ambassadors of Japan and Canada, three university presidents and heads of various State bodies.