From Democritus to Einstein, the long search for the tiny atom

Their existence was posited 2,500 years ago, and they were thought to be ‘indivisible’ 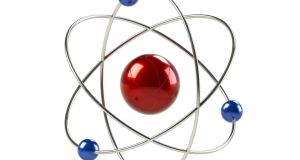 “When were atoms first discovered?” I was recently asked. The question often comes up at this time of year, as our students embark on their first course in modern physics. As so often in the history of science, there is no simple answer to the question – the story of the discovery of atoms is not a short tale of one great insight, but the culmination of ideas and observations over a great many years.

As far as we know, the concept of the atom was first mooted by the philosopher Democritus, who lived in Greece in the 5th century BC. Considering a solid object, he posed a simple question: if one had a fine enough tool, could the object be divided up into ever smaller parts, or was there a physical limit beyond which the object could never be further divided? He became convinced that such a limit must exist and named it the atom (meaning “indivisible” in Greek).

In the 19th century, it was realised that many chemical reactions could be understood if it was assumed that different chemical elements combined with one another in fixed ratios; this led John Dalton to his famous postulate that each chemical element was made up of many millions of tiny atoms of that element, and the atoms of each element were different. Further studies of chemical reactions led to the first estimates of Avogadro’s number (defined as the number of atoms in one gram of hydrogen), but calculations were hampered by the fact that it was not yet realised that some atoms combine to form molecules.

In the latter half of that century, the physicists got involved. Brilliant theoreticians such as James Clerk Maxwell and Ludwig Boltzmann demonstrated the known laws of heat and thermodynamics could be explained in terms of the ceaseless thermal motion of large assemblies of atoms, a complex branch of physics that became known as kinetic theory.

However, none of the above constituted direct evidence for the existence of atoms; indeed, whether atoms really existed or simply constituted a useful theoretical device for calculation remained a lively debate among scientists at the turn of the century.

Enter a young Albert Einstein, who became obsessed with the idea of establishing the reality of atoms even as a student. In one of his earliest scientific papers, Einstein showed that applying the ideas of kinetic theory to liquids gave an estimate of Avogadro’s number that was in good agreement with estimates from chemistry. Next, in a famous paper of 1905, he suggested that a careful study of the motion of particles suspended in water could illustrate the reality of atoms and molecules.

His key insight was that the average effect of many millions of water molecules impacting on a tiny particle would not be zero at any one instant; instead, the particle would be buffeted from side to side due to random statistical fluctuations in the motion of the molecules. From considerations of kinetic theory and of statistics, Einstein derived a simple formula for the movement of the suspended particle as a function of time, and challenged experimenters to put it to the test.

Long before Perrin’s experiments, clues had already emerged that atoms were not in fact indivisible

The well-known French experimentalist Jean Perrin rose to the challenge. Putting together particles of gamboge (a yellow pigment) of identical size and shape, he and his team used a high-powered microscope to monitor the motion of the particles when suspended in water. By 1908, the results were unambiguous: the motion conformed exactly to Einstein’s formula.

Perrin’s experiment marked a turning point for the atomic hypothesis; from this point onwards, almost everyone became convinced of the reality of atoms. By 1911, estimates of Avogadro’s number had emerged from a diverse array of natural phenomena, from considerations of black body radiation to studies of the scattering of light by the atmosphere. As for Perrin, he was awarded the 1926 Nobel prize in physics.

However, that doesn’t mark the end of the story. Long before Perrin’s experiments, clues had already emerged that atoms were not in fact indivisible. Experiments with cathode ray tubes charged to high voltage demonstrated that tiny, electrically charged particles could be stripped off neutral atoms; these particles, named electrons, were the first of a host of sub-atomic particles discovered during the 20th century. But that’s another day’s story.