As the natural world declines in parts, evening displays of flocking birds can make hearts sing 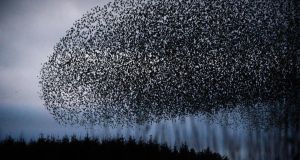 The light at this time of year has a particularly ethereal quality. Dim and hazy, struggling to reach us, it sometimes seems to illuminate only shadows.

While beautiful in its own bleak way, it – combined with the post-Christmas slump and the long slog until payday – can play havoc with our minds, making the end of January feel like the darkest time of the year.

It’s not, of course (we’re on the right side of the winter solstice now), but despite the crocus bulbs sprouting up defiantly in the pots outside my front door, spring still feels a lifetime away and the energy required to get outdoors into the fresh air is difficult to summon.

But according to the science, it’d be worth it: spending time in green spaces can lift our mood and reduce stress, among other psychological and emotional health benefits.

Studies have measured cortisol in people who walk through parks versus those who don’t, and others have measured the physical and mental wellbeing of hospital patients with a window looking out on to a green area.

A whole industry has sprung up around the findings of observations like these: fields of inquiry with names such as ecopsychology, diagnostic terms including nature-deficit disorder and remedies like ecotherapy. The scientific evidence is on their side.

For nature lovers, though, it can be more of a challenge. There are no studies that show a correlation between wilder, more natural, biodiverse green spaces and higher mental health benefits, though some of us might argue – unscientifically, on the basis of personal experience – that there should be.

Can you compare the constricted, manicured rows of geraniums and neatly trimmed lawns in an urban park to the unbounded joy of a hay meadow bursting with flowers, grasses and insect life? Can you heck.

Nor are there studies that I’m aware of that show the negative impact of degraded habitats on mental health. I’ve ruined many walks in the Wicklow Mountains by informing friends of the ill health of the blanket bog they were admiring, or causing them to notice the almost total lack of birdsong in a conifer forest, or pointing out a freshly scrubbed-out hedgerow that they may not otherwise have seen. Those of us who notice nature notice the lack of it everywhere we go.

This has implications for people working in the field: ecologists, conservationists, wildlife rangers, people who entered this line of work to look after something that is being continually lost and eroded.

“Eco burnout” is a thing. Like doctors and nurses struggling to do their jobs in an underfunded hospital, or Gaeilgeoirí watching their treasured language fade from daily use, we get weary. Solace can be hard to find. Optimism can feel naive.

If it feels this way for us now, imagine what the nature lovers of the generations past might feel. The “normal” that we grew up with would be devastation to them: my father remembered the River Nore of his childhood teeming with freshwater pearl mussels, and days spent hunting in pristine waters for the pearls. When I was small, he’d pick shells out of the bed of the river – that was all there was to show me.

Today, I can’t even find shells, let alone eels, or pike, or the salmon that we used to watch leaping in the rapids.

It can be hard to focus on the bits of nature that make our hearts sing – it can be hard to even find them – but some are still out there: earlier this month, hundreds of people gathered at spots all over the country to witness one of the greatest natural spectacles this island has to offer. Enormous flocks of starlings wheeled and swelled in the skies, exploding like black fireworks, gliding like smoke. Murmurations are equal-opportunities captivators: you need no special knowledge or equipment, just a willingness to stand on a cold January evening, look up and be beguiled. Plenty did: young and old, urban and rural, all across the midlands.

It was a life-affirming experience, and one I didn’t regret driving a 150km round trip to witness. Maybe it was this kind of nourishment on a bleak day that inspired the great poet Emily Dickinson to write: “ ‘Hope’ is the thing with feathers.”