Atoms for Peace or Weapons of Mass Destruction? 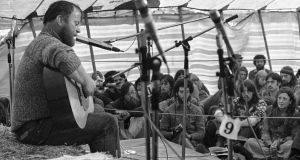 Christy Moore entertains some of the protesters at an Anti-Nuclear protest at Carnsore Point, Co Wexford, in August 1978. Photograph: Eddie Kelly

While the public war of words between US President Donald Trump and North Korean leader Kim Jong-un seems to have quietened down, for those who remember the Cold War it is hard not to feel a creeping sense of déjà vu. While many scientific developments have been “weaponised”, nuclear technology is one that probably strikes the most fear.

Dwight Eisenhower’s famous 1953 “Atoms for Peace” speech to the United Nations represented these tensions between a technology with potential for mass destruction but also for huge benefits. Eisenhower told the UN General Assembly: “The United States knows that if the fearful trend of atomic military build-up can be reversed, this greatest of destructive forces can be developed into a great boon, for the benefit of all mankind. The United States knows that peaceful power from atomic energy is no dream of the future. The capability, already proved, is here today.”

The speech suggested setting up an international atomic energy agency under the UN, the continued stockpiling of “fissionable materials” and further research into how to use nuclear technology for the benefit of mankind in energy, medicine and agriculture. The agency came into being and indeed held its 61st conference last month. At the conference the director celebrated the continued extension of nuclear power including most recently in Afghanistan.

Yet nuclear energy, even in peace, still brings risks, as we were most recently reminded by the accident at the Fukushima plant in 2011. While incidents like this are rare, they can have tremendous impacts and continue to make many people consider atomic energy more “fearful” than “great boon”.

Ireland has never opened a nuclear power plant, although it has been debated at several points in the past. Throughout the 1970s there was considerable discussion of nuclear power across the island. A Nuclear Energy Board was established in 1968 with the aim of introducing nuclear power to the Republic at a time when many other European countries were also establishing nuclear power plants. The UK had four such plants by 1968. France’s nuclear expansion took place in the 1970s and the country still has the most nuclear power plants in Europe (58). A major driving force of the early plans was a sense of increasing dependence on imported oil, as the increasing demands for electricity could not be met with materials such as peat or hydroelectric power.

Studies were conducted and Carnsore Point was proposed as the site for Ireland’s first nuclear power plant. The plan was largely stopped, not by the intervention of politicians or scientists, but by the public. Mass protests in the 1970s also suggested a growing international movement against nuclear power even in peace. In 1978, Fortnight reported on the three-day occupation of Carnsore Point by at least 10,000 people including speakers from “Italy, France, Germany and America relating the experience of their own country”, videos of protests in other countries as well as “some fine Irish music”.

Photographs might now be confused with those from a music festival: lots of young people wearing improvised rain gear and even musical performance (notably Christy Moore). Yet there was a serious determination among the protesters. The Irish Times predicted that the event “will be remembered as a turning point by all those who took part”. The publicity surrounding the bulldozing of a cairn built by the protesters induced further public outcry. Sometimes symbols are powerful things.

By 1986 the nuclear power option had faded into the background. A gathering at Carnsore was reported by Mary Cummins in The Irish Times as “other-worldly”; a combination of oddballs, vegetarians and Romany over from England. Something of the urgency had passed, only hundreds rather than thousands had materialised and the recent Chernobyl disaster would have made it difficult for the government to adopt a bullish attitude towards nuclear power. The battle over nuclear power had been decided well before the 1999 Act banned its use in the Republic.

If you are interested in the history of science, please join me at the annual conference of the History of Science, Medicine and Technology Network Ireland at the RDS on October 13th and 14th. Registration details at hstmnetworkireland.org