The benefits of being among the cyborg generation 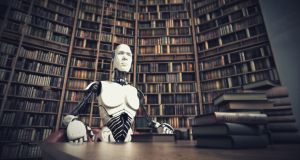 About two weeks ago my father became a cyborg. A “pocket” was cut into the skin of his chest and a combination pacemaker/defibrillator implanted. Wires were threaded into nearby veins and pushed into contact with the heart where, if the pacemaker detects inadequate electrical activity, they will deliver the electrical charge needed to stimulate the heart to pump.

The pacemaker also records information about my father’s heart function that is downloaded to an external device and delivered electronically to his cardiologist. To his grandsons’ great disappointment, his technological enhancement provides neither superhuman strength nor the ability to see through walls.

The marvel of the pacing industry is the speed with which creating such a human-machine hybrid has become both ordinary and common. In the United States, where my father had his surgery, hundreds of thousands of pacemakers are installed every year. In Ireland, only 2,288 pacemakers were implanted in 2013, according to data collected by the European Heart Rhythm Association.

Pacemakers in fact represent a minority of the more than 200 million medical devices implanted in Western Europeans. If you’re not a cyborg, you probably know one.

The history of the development and adoption of pacemakers is a recent one. The technology was developed in the 1950s, well before the US Food and Drug Administration required medical devices to go through stringent clinical trials. According to the historian Kirk Jeffrey (Machines in our hearts, Johns Hopkins University Press, 2001), the pacemaker began as a sort of ad-hoc response to the medical emergency of a stalled heart. The cardiologist Paul Zoll combined an electrical stimulator with two “needle electrodes” that were inserted under the skin and next to the heart. As electrical stimulation of this kind was painful (think Flatliners), the patient was usually sedated and the procedure was intended to be temporary and followed by a return to normal heart function.

To understand pacing it is necessary to understand the electricity of the heart. Your heart has its own pacemaker, the sinoatrial node. This is a spot on your right atrium (right upper chamber of the heart) that generates the signal to contract which spreads from the upper chambers to the lower chambers. Each time the signal repeats, the heart performs its contractions sending blood to the lungs from the right side of the heart and to the body from the left side of the heart. Problems with this system include “heart block”, where the electrical signal is obstructed in its pathway along the heart, and fibrillation, where the contraction becomes irregular

The turning point for pacing technology was the development of a permanent implantable device. In the late 1950s a team of surgeon and electrical engineer created the Chardack-Greatbatch pacemaker, which was first implanted into a patient in 1960. The machine, a thick disc encased in silicone and about the size of the palm of your hand, used a battery and electrical leads attached directly to the heart. The surgery was complex and the electrical impulse provided was constant, regardless of whether the patient’s heart block was constant. The new permanent pacemaker created a new medical problem when the electrical stimulus from the machine and from the heart competed with one another and caused fibrillation.

Two important developments were required to make the pacemaker safer as a permanent implant. First, a device was created that could respond to the electrical signals of the heart and only deliver stimulus when it was required. Second, the complexity of the surgery was reduced by the insertion of the electrical leads into the veins rather than directly attaching them to the heart. These two alterations helped the pacemaker to become, by the 1970s, one of the fastest-growing medical technologies. New indications added for its use and the development of Medicare (free hospital care for retired Americans) probably facilitated its wide adoption. By the 1980s the pacemaker had become so ubiquitous in the US that some commentators on the American health system were claiming that pacemakers were being overused at great cost.

No one would return to the days when doctors could simply rig up devices for serious medical conditions and test them on available patients. But the story of the pacemaker does show how quickly a technology can develop from extraordinary to commonplace.