Pollution continues to take its toll on the poor

Are we now condemning large parts of the world to more profound legacies of poverty linked to past and present pollution? 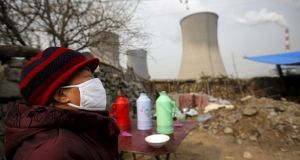 A woman wearing a mask reacts at her garden which is located next to the chimneys of a coal-fired power plant in Shijiazhuang, Hebei province, China. Photograph: Reuters/Kim Kyung-Hoon

This newspaper recently highlighted the findings of the Lancet Commission on Pollution and Health. The commission pointed to the serious health burdens created by pollution, a burden that falls greatest on the poor and those in developing countries.

It suggested that pollution control in high-income countries had not only contributed to better health but had been accompanied by economic benefits.

The authors argued that “pollution is not the unavoidable consequence of development” and proposed ways of tackling pollution in the developing world.

The unequal distribution of pollution is in fact a very old story. Cities, past and present, have usually been the greatest sources of pollution deriving from a concentration of people and of industries. Within cities, the most densely populated and poor areas were often also adjacent to polluting industries.

The development of the Dublin suburbs during the second half of the 19th-century can be seen as a direct response to critical levels of urban pollution: the city’s wealthy residents wished to partake of the benefits of the city in terms of commerce but did not wish to bear the costs in terms of pollution.

They chose instead to build new houses in the “airy” suburbs and to establish new townships independent of the Dublin City Council to regulate them.

So what forms of pollution were 19-century Dubliners eager to avoid? The most obvious included the accumulation of filth from street sweepings, privies, ash pits, vegetable stalls, and slaughterhouses. These products of the residents and their foods were collected and removed by the constant activity of the council’s public health department. The problem was where to put them.

Despite repeated calls for their recycling as rural fertiliser, in fact there was little market for this combination of street sweepings, trash and human faecal matter.

Instead, the council developed a series of manure depots in which it collected the waste for either sale or removal to parts more remote and less populous.

Unsurprisingly the location of these depots was contested, residents of Phibsboro complaining that such a depot would be “highly detrimental” and reduce property values.

To avoid such conflicts, most depots were situated in the poorest neighbourhoods where land was cheapest and the neighbours less likely to possess the means and inclination to complain.

Public health reformers warned of the long term effects of giant rubbish heaps on the city’s subsoil but they were largely unheeded until the twentieth century.

Beyond the organic wastes produced by those humans and animals living in the city, there was plenty of chemical pollution. The air was full of smoke from chemical works, printing works, dye works, foundries and artificial manure manufactories. Many of these businesses were at the edge of inner city districts or, depending on scale, surrounded by housing.

Tanneries and other businesses processing hides clustered along Watling Street where there were also many tenements.

Gradually the introduction of regulations reduced the smoke pollution by demanding higher chimneys and other modifications such as “scrubbers” that reduced the particulate matter emitted.

Yet the legacy of these polluting businesses remains in the socio-economic pattern of the city: the areas with the highest rates of pollution and poverty in the 19th-century continue to overlap with the poorest areas of the city today.

Are we now condemning large parts of the world to more profound legacies of poverty linked to past and present pollution? We rightly became intolerant of pollution in Ireland and responded with regulations. Yet we have not lost our interest in commercial products made by polluting processes somewhere else in the world.

The developed world is now a bit like a giant version of Dublin’s early suburbs except now we don’t even have to see or smell the centres of pollution where our goods our made. The map of poor, polluted Dublin would have had “hot spots” along the Poddle and Dodder Rivers, in Ringsend and North Wall as well as smaller pockets immediately adjoining Sackville (now O’Connell) Street.

The map of the poor, polluted globe lights up in sub-Saharan Africa, parts of Eastern Europe and the Indian sub-continent. Action is needed if this is not to become a permanent geography.