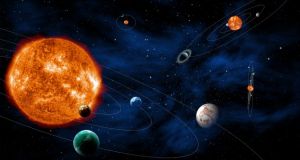 The planetary transit method works through observing the tiny, tell-tale dimming of starlight in a regular, repeating pattern, which can be explained by an exoplanet repeatedly orbiting in front of its host star

The first exoplanets – planets that lie beyond our solar system – were discovered in 1992. Since then 3,946 more have been identified. But how many of these might harbour life forms?

That’s the question the European Space Agency (ESA) PLATO (PLAnetary Transits and Oscillations of stars) mission, which launches in 2026 with Irish input, is aiming to answer. The data scientists believe pinpointing the exoplanets most likely to harbour life will come from 26 telescopes all working together.

The mission focus is to identify Earth-like planets orbiting bright distant stars in our Milky Way. Once identified the goal is to pinpoint exoplanets with an atmosphere that suggests the presence of life, such as having a high percentage of oxygen.

Réaltra will supply the specialist electronics which will tightly control the temperature of PLATO’s telescopes throughout the life of the mission. It is the largest single award for an Irish space company since Ireland joined ESA in December 1975.

OHB was announced as the main industrial contractor for PLATO in October 2018 in a contract worth €288 million. It searched across the EU for the various expertise it needed, and found some of what it required with Réaltra.

“Our job is thermal control of the 26 telescopes within a very, very tight range for the whole of the mission – this is a six-year mission,” says company co-founder Danny Gleeson. This control is needed to ensure the telescopes are doing their job properly.

“We have to design for deep space where there is lots of radiation and normal electronics doesn’t survive there,” says Gleeson. “The electronics in our iPhone or laptop wouldn’t survive in space.”

The spacecraft and its scientific payload could be subject to a wide variation in heat. At times its telescopes will be pointed towards a heat source, such as the sun, and at other times towards the frozen expanse of space where temperatures typically hover at around 3 Kelvin; some -270.15 Celsius.

Dr Gavin Ramsay is a community scientist for the PLATO mission and an astronomer at Armagh Observatory and Planetarium. He advises ESA on how the science objectives can best be met.

The mission will use the planetary transit method, Dr Ramsay says, to first identify an exoplanet. This method works through observing the tiny, tell-tale dimming of starlight in a regular, repeating pattern, which can be explained by an exoplanet repeatedly orbiting in front of its host star.

Yet that’s not all this approach can reveal, says Dr Ramsay, who is one of the 12 members of PLATO’s science working team. “The transit method gives the size of the object which is causing the transit. If observed multiple times it gives the planet’s year or orbital period.”

PLATO is Europe’s first exoplanet-hunting mission, and hopes are high given that its 12 telescopes – working together – provide a field of view comprising 2,300 square degrees. That’s 20 times larger than NASA’s Kepler mission, which achieved extraordinary planet and star-hunting feats. Kepler retired in October 2018, after nine years’ service, during which it identified a staggering 530,506 stars and 2,662 exoplanets.

The science operations centre for PLATO is based at the European Space Astronomy Centre, a ESA-facility located outside Madrid. Laurence O’Rourke from Mullingar is based there, working as a senior systems engineer for PLATO.

O’Rourke, who is a graduate of Maynooth University and UCC, has been with ESA for almost 20 years, and has worked on many missions, including Rosetta which in 2014 landed the Philae lander on a comet called 67P/Churyumov-Gerasimenko, which was travelling at a speed of about 135,000 km per hour.

The Westmeath man’s role in the PLATO mission is to plan where the spacecraft will point its telescopes during the mission. This involves locating over 20,000 stars in the sky so that the 26 telescopes are pointing exactly where they need to be.

“We will also take the data that is generated by the satellite, and ,when it comes down on the ground, process it, and produce the initial data products,” O’Rourke says. “We can then pass them [the data] onto the scientists which are based around Europe to do further analysis, and to try and identify the planets that are around those stars.”

Astronomers are interested in studying the chemical make-up of the atmosphere of exoplanets to try to determine whether a planet has water or a significant amount of oxygen; two significant “biomarkers” for life as we know it. Researchers also want to determine what the temperature of the planet might be, or whether it has a lot of clouds or storms.

The data gathered from PLATO will help astronomers predict the chance of life existing on individual planets. In the longer term this will help space agencies or companies to select where to send their expensive probes to search for extra solar life.

“On Earth life emits a lot of oxygen, so much in fact that about 21 per cent of the Earth’s atmosphere is oxygen,” says Dr Ernst de Mooij, an exoplanet atmosphere researcher at DCU.

“This gives a very clear signal in the composition of the atmosphere of the Earth and one that we can search for in exoplanets. In general we probably want to look for abundances that show a chemistry that is very out of equilibrium and which could be indicative of life.

“The PLATO mission would provide the first step, identifying planets that are not too warm and not too cold, which we can then investigate in detail using the largest telescopes on Earth and in space. This will not be easy, the planets will be small and the signals from the atmosphere will be tiny.”

If we do find life on a planet, whether it is inside the solar system or outside, most scientists believe it is most likely to be simple life rather than intelligent life like ourselves.

PLATO cannot hope to provide a 100 per cent guarantee that a given exoplanet harbours life, but if there is a very distinct “disequilibrium” in its chemistry which can’t be explained by something else, Dr de Mooij adds, then it’s possible to say with “reasonable confidence” that life exists on that planet.

Should PLATO find evidence that strongly suggests that life exists on an exoplanet it’s likely to be into the distant future before we are capable of sending a probe to reach that planet, and finally and unequivocally confirm that we are not alone.

“The New Horizons spacecraft travelled for more than nine years to get from Earth to Pluto, a distance of approximately five billion kilometres,” Dr de Mooij says. “But the nearest star is more than 8,000 times further away, so a trip [there] would take over 70,000 years.”

More than 1,500 scientists issue funding warning and call for department for higher education and research 12:50
O’Doherty and Waters to appeal court’s dismissal of legal action 12:43
Government accused of reneging on Defence Forces recruitment 10:20
Charities call for minister to represent them in Cabinet 10:13
Family of Irishman who fell to death in Australia call for candles to be lit in tribute 09:27