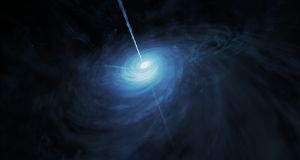 Artist’s impression showing how a very distant quasar powered by a supermassive black hole may look close up. Photograph: PA 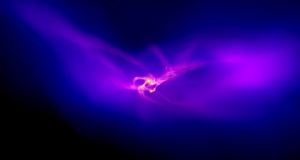 Zoom of the inner 30 light-years of the dark matter halo. Image derived from a super computer evaluation: John Wise, Georgia Institute of Technology.

The sequence of events leading to the creation of massive black holes in the universe has been discovered by astrophysicists including two researchers from Dublin City University’s Centre for Astrophysics and Relativity (CfAR).

Light released from around the first massive black holes in the universe is so intense it is able to reach telescopes on the Earth – a truly vast distance away.

Light from the most distant black holes (also known as quasars) has been travelling towards earth for more than 13 billion light years, allowing the astrophysicists to look back in time to the early universe. However, how these monster black holes formed remained elusive until now.

The work is made possible by undertaking sophisticated simulations of galaxy formations using super computers.

They have shown that when galaxies assemble extremely rapidly, and sometimes violently, it can lead to the formation of a massive black hole. The rapid assembly of gas means that instead of normal star formation proceeding, embryonic stars become puffed up by hot gas.

This leads to the formation of a “supermassive” star which can only survive for a short time before quickly collapsing into a massive black hole.

The new study turns upside down the long-accepted belief that massive black hole formation, which occurred in the first billion years of the universe, could only happen in regions bombarded by powerful radiation from nearby galaxies.

This shifts that paradigm and opens up a whole new area of research, according to Dr Regan, who is a research fellow at CfAR.

Their findings were published in the journal Nature on Wednesday. The research was funded by NASA, the EU and the US National Science Foundation.

“At first, when we found these black hole formation sites in the simulation we were stumped,” explained Dr Regan. “At a human level, we were really confused initially. We then realised this is actually a hugh breakthrough on what people have been working on for a very long time.

“Previous theories suggested this should only happen when the sites were exposed to high levels of star-formation killing radiation. As we delved deeper we saw that these sites were undergoing a period of extremely rapid growth. That was the key!”

The violent and turbulent nature of the rapid assembly, the violent crashing together of the galaxy’s foundations during the galaxy’s birth prevented normal star formation and led to perfect conditions for black hole formation instead, he added.

Their next goal was to probe further evolution of these exotic objects. “Where are these black holes today? Can we detect evidence of them in the local universe or with gravitational waves?”

“Astronomers observe supermassive black holes that have grown to a billion solar masses in 800 million years,” said Dr John Wise from Georgia Institute of Technology. A solar mass is the mass of our own sun.

“Doing that required an intense convergence of mass in that region. You would expect that in regions where galaxies were forming at very early times,” he said.

What are known as “Renaissance Simulations” of the early universe, on which this research is based, achieve this by working out “on the fly” where interesting things are happening and focusing a lot of effort there, Prof Downes said. “However, even with this extremely efficient method, this work is so challenging that there is no way to get these unique insights into our universe without the use of some of the world’s largest supercomputers.”