Did life begin on Earth in volcanic pools?

Confirmation of hypothesis could guide exploration for life on other planets 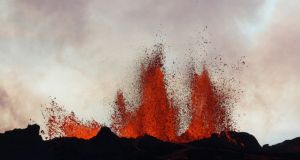 Although life began on Earth about 3.8 billion years ago, figuring out how living cells first arose from lifeless molecules remains one of the biggest tasks facing science. Research now concentrates on two hypotheses. Either life arose around deep-ocean hydrothermal vents, or it arose on Earth’s surface at volcanic hot springs. This latter and most recent hypothesis seems very promising to me. It is described by Martin Van Kranendonk, David Deamer and Tara Djokic in the August 2017 edition of Scientific American (August 2017).

Van Kranendonk and colleagues studied 3.48-billion-year-old sedimentary rocks in the Dresser formation in the remote Australian Pilbara region. Some of these rocks were created by volcanic surface geysers and contain bubbles released by bacteria-like micro-organisms trapped in a sticky film. Mounting evidence from such rocks and biofilms points towards life’s origin on land at volcanic hot springs and pools like the erupting geysers and steaming pools today in Yellowstone National Park. The hypothesis goes as follows.

Many of life’s basic building-block molecules, such as amino acids (building blocks of protein), form in space and fall to Earth. They also formed in Earth’s early atmosphere and in hot springs and accumulated in geothermal pools around the hot springs. These compounds became sequestered into tiny bubbles bounded by fatty membranes (protocells) where they joined together to form more complex chemicals.

Increasingly complex polymers formed during the repeated cycles of drying and wetting that are characteristic of these hot pools and polymers were exchanged between protocells during gel phases intermediate between wet and dry periods. All of this activity is driven by the heat from the geothermal field.

The formation of polymers of simple building-block chemicals under volcanic hot pool conditions was also simulated in the laboratory. Mixtures of lipid and nucleic acid building blocks (nucleotides) were subjected to many wetting/drying cycles. Polymers up to 100 nucleotides long formed, resembling the original genetic material RNA.

Polymers best suited to enhancing protocell survival were naturally selected from the vast variety produced and shuffled over endless cycles of wetting, exchanging and drying. The best-adapted protocells spread to other pools, moving by wind and water. Eventually one protocell developed the ability to divide into two daughter cells, setting the scene for the development of the first living microbiological community. Some of these were pushed into salt-water estuaries and after billions of years evolved into multicellular plants and animals. It is calculated that this mechanism of rapidly generating prodigious variety and sieving it through natural selection could have produced a living cell in about 10 million years.

The alternative theory of life’s origins began in 1977 when hydrothermal vents were discovered on the Pacific ocean bottom. These vents spew out minerals including iron and sulphur and gases such as hydrogen sulphide and methane, supporting surrounding communities of large worms, clams, molluscs and bacteria.

The hypothesis was formulated that life originally began on Earth around such vents that provided heat and nutrients and a relatively stable environment compared with the tremendous storms that wracked Earth’s early surface. However, this hypothesis struggles to explain how simple molecules were prevented from moving away from each other quickly in the ocean water, thereby allowing them to interact and form complex polymers and cell membranes.

Whichever hypothesis turns out to be true will guide explorations for life on other planets. If the deep-sea vent hypothesis is true, then, for example, the ocean world of Jupiter’s moon Europa might harbour life. And as for Mars, although the planet once had shallow seas, it doesn’t have the plate tectonics that create hydrothermal vents. But Mars did have widespread volcanism and hot springs and life may have originated there.