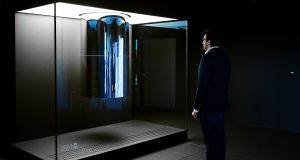 IBM Research director Dario Gil with the Q System One computer at the company’s research facility in Yorktown Heights in New York.

Henry Ford reputedly said that if he had asked people what they wanted, they’d have chosen faster horses, not cars. In the past two decades, we sought faster transistor-based computers. Yet these may be overtaken by a new beast altogether – quantum computers.

Transistors are switches which can be open or shut; a 0 or a 1. How to make multiple switches carry out calculations has been known for hundreds of years, but it was only in the 20th century that it was possible to jam millions, then billions, into a microprocessor.

Quantum computers are powered not by transistors, but qubits. “Plausibly this [qubit] device can replace the transistor as the basis of information technology,” according to Davis. The potential of quantum computers sees them cast as disrupters in sci-fi, along with claims that they could break the internet.

It is hard to overstate their real-world potential. A quantum computer could crack all our encryption codes, one reason countries carefully monitor their progress. It is not just their potential code-breaking savvy drawing attention. A quantum computer could track atoms, molecules, in real time, and design completely new materials – or solve physics or financial problems that are impossibly complex right now.

The quantum world which underpins these capabilities is truly weird. A regular laptop may run with 32 bits, which means its central processing unit can accept one 32 bit number. Each of the 32 transistors is open or closed, set at zero or one. “In the quantum world a qubit is not just one number but two, because it can be open and shut at the same time,” Davis explains.

“A qubit can be a zero and one and everything in between,” says Dr Heike Riel, scientist at IBM research labs in Zurich. “This is a big difference to classical computing, because qubits now contain much more information, which you can use in your calculation.” Today’s typical microprocessor boasts about 10 billion transistors. Adding one transistor means nothing – to double performance, you need to double the number of transistors.

Quantum computers operate to different rules. “Add one qubit and you can [in principle] double the performance of a quantum computer,” Riel points out. Thirty-two qubits offer the potential of two to the power of 32 (232) numbers on the input register.

“That is an enormous number and would make the computer billions of times faster, because the same device can deal with multiple numbers,” Davis adds. “This is called exponential speed up and is a fundamental reason why quantum computing is so important.”

IBM was the world’s pioneer in quantum computing. Google joined in the race within the last decade to develop powerful quantum computing. Last October, it reported that its Sycamore processor (with 53 qubits) vastly outperformed a classical supercomputer – hailing this as quantum supremacy, sounding like a James Bond movie, and making the cover of the prestigious science publication Nature.

“It is a revolutionary achievement,” Davis says. “It puts pressure on the global information technology sector, not because this computer is guaranteed to sweep away silicon-based computing, but because it might.” The anodyne-sounding Sycamore zoomed two billion times faster than the best supercomputer, at a specific test (a task which IBM was quick to point out had no real-world uses).

IBM’s quantum computing also made the cover of Nature twice in recent months – for a quantum chemistry puzzle and machine learning. An IBM data-centre facility outside New York hosts 15 quantum computers, the largest being a 53-qubit computer.

These are available to about 100 clients who experiment with algorithms, and include finance, chemicals, oil and gas and the car companies. In 2016, IBM opened up free access to its five-qubit device, which readers can log on to to try.

Quantum computing utilises a phenomenon called entanglement, which is so weird that it kept Albert Einstein estranged from quantum theory. It says that if you separate two entangled particles, at any distance, measuring one will predict the state of the other. “Ireland’s great physicist, John Stewart Bell, proved Einstein was wrong [about entanglement] and that this was an elementary property of nature,” notes Davis. Qubits inside quantum computers can be entangled, which adds to their awesome power.

Quantum computers run at temperatures chillier than outer space. This is because they rely on superconducting materials, which work at close to zero degrees Kelvin. There is no immediate prospect of even universities installing these devices on site. Quantum computers today are as big as a garage, and require massive cryogenic plants necessary for super-cold temperatures.

However, there is no law to say that superconducting materials are restricted to extremely low temperatures. “In principle, they could exist at room temperature,” says Davis. “They just haven’t been discovered yet.”

He seeks new superconducting materials that can operate at liquid nitrogen temperatures. “There’s a race on worldwide to find these materials,” says Davis, who says you need a combination of intuition, collaboration with genius colleagues, good luck and hard work.

There is no reason Ireland cannot play a role in finding new superconductors or in quantum computing. “Most of the work necessary to make a commercially viable quantum computer has not yet been done, and that work mostly involves scientific creativity,” he says. “If Ireland invests enough resources, I’m very confident it could play a major role.”

Billions of dollars are invested publicly in quantum computing around the world. Science agencies in the UK, Canada, Japan, Korea, Germany and Russia see quantum computing as hugely significant for reasons of national security. This funding is the tip of the iceberg.

“Countries and federations are intensely focused on quantum computing, because of cybersecurity and cyberwarfare issues,” Davis adds. Secrecy abounds.

Innocuous-sounding companies in North America and the Far East are hiring experts in this area. It is like rocket science in the 20th century, he says: “You didn’t publish how your rockets worked because they were so strategically important.” A quantum computer could potentially hack satellites, power infrastructure or the most secure classical computers.

Davis stresses that if quantum turns out to be the future of computing, Ireland will need expertise and trained people to attract future industry. “If there is a sudden paradigm change, at least then you won’t be left out in the cold. You will have some people who know what is going on.”

Most experts predict quantum computers will work alongside classical computers, at least initially.