As the price of space flight falls, more runners enter the race 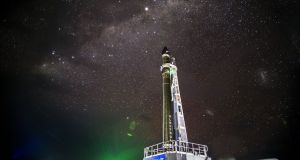 The Electron rocket in a launch pad. Photograph: Courtesy of Rocket Labs 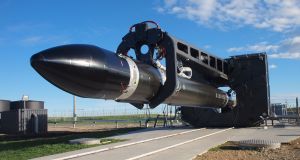 A view of the the Electron rocket: Photograph: Courtesy of Rocket Labs

A new space race has begun; but this time, it’s not superpower-led. This one is led by industry, government bodies and research groups who have gained access to space thanks to the availability of far cheaper, smaller rocket launchers.

Think of a space rocket. Many might automatically think of “traditional rockets” like the giant Saturn V; almost twice as tall as Liberty Hall, spitting smoke and flames as it breaks free of the launchpad, carrying US astronauts to the moon. But, big, powerful rockets are expensive, even for the US federal government.

Saturn V cost the US taxpayer $185 million (€164.8 million) per launch for the Apollo missions between 1969 and 1972; equivalent to $1.2 billion (€1.07 billion) per launch today. For decades those kind of costs ensuredspace was off-limits to the private sector. However, in recent years rockets have begun to get cheaper and smaller.

Smaller rockets are better suited to launch the small satellites that will make up the global satellite constellations planned by ambitious companies such as SpaceX, OneWeb, and Amazon. These constellations will provide global 5G internet and data services, including those places now without internet.

“The number of these satellites to be launched in the next five to 10 years is in the thousands,” says Danny Gleeson, chief commercial officer and founder of successful Irish company Réaltra Space Systems Engineering. “There are currently more than 100 developments of small launchers around the world – in various commercial ventures – looking to take up the demand to launch these small satellites.”

In 2010, SpaceX launched its Falcon 9 rocket. This was a pivotal moment for the commercialisation of space. It was a big, powerful heavy-lifting rocket, much like the rockets that came before it. Yet it was cheap, at $50 million (€44.5 million) per launch. This was possible because it was manufactured using all the standard materials, technologies and techniques of mass production. It was also partially reusable.

The Falcon 9 cost Nasa about $390 million (€347 million) to develop, with SpaceX as the “anchor tenant” for the project. SpaceX had close links with Nasa since 2008 when its Dragon Spacecraft was used to carry people and supplies to the International Space Station. Nasa subsequently selected SpaceX to build the Falcon 9, which gave it something it needed: a cheaper, reliable rocket launcher.

The United Nations estimates a billion people do not have any access to reliable internet services. Given the size of the potential market it’s no surprise that SpaceX, OneWeb, Amazon and Facebook and others are all engaged in building internet-based satellite constellations, or are actively making efforts to do so.

OneWeb – a joint venture with Airbus – launched the first six of its plan for a constellation of 648 satellites in February 2019 using a Russian Soyuz-2 rocket. It had launched 74 satellites by March of this year when it declared bankruptcy due to a “cash crunch” caused by the coronavirus crisis. OneWeb is maintaining its satellite operations centre while a court determines where its assets end up.

In May 2019, SpaceX began to build its Starlink constellation – which will be made up of 12,000 networked, small satellites positioned all around the globe – with the launch of a batch of 60 satellites on-board Falcon 9. To date, SpaceX has launched 420 satellites, and it aims to launch more than 1,500 by 2022.

The global internet constellations are being built to be able to handle multiple failures of satellites and still operate; that’s why so many satellites are needed. If a satellite fails, the system re-configures and the service continues to work. The operators use cheap small rocket launchers to replace the failed satellites.

The only other private company to build a rocket which has carried satellites into Earth orbit is Rocket Labs, a firm founded by Peter Beck, a New Zealand engineer. The company’s Electron rocket – the world’s first privately-built small rocket launcher – had its maiden flight in 2017 and has flown 10 times since.

Beck, an engineer who dreamed of building space rockets as a child, has now established Rocket Labs as the first and only micro rocket launch provider in the world. Rocket Labs is where people go if they want to launch a small satellite into orbit on a limited budget.

The company has launched 48 small satellites from the US and a private launch pad in New Zealand; the only one in the world.

In 2013, Beck sought funding in Silicon Valley for his small rocket idea. “I was a guy from New Zealand who required a bilateral treaty between two countries to stand up a small launcher that had never been built before, in a country that had no space industry or heritage.” The odds weren’t great, but Beck got his money.

The success of Rocket Lab has led many to ask Beck whether he will start to build larger rockets. “I have been asked so often, when are you going to build a larger rocket Pete? The answer is never. We have built a vehicle that is ideally sized and suited for the evolution and explosion of the small satellite industry.”

The Electron rocket stands 56 feet tall and costs $6 million (€5.3 million) to launch. That’s one-quarter the height of Falcon 9, and eight times cheaper. The Electron is specifically built to carry a single small satellite into space, and to dispatch it into its specific orbit, like a taxi that drops a passenger right to their door.

Cheaper access to space has made it possible for government agencies and university and research groups to launch small satellites to perform specific data collection tasks, whether it’s monitoring wildlife in Africa, assisting with emergency responses to disasters, or watching out for asteroids in space.

The cost of a satellite is no longer completely out of reach for government agencies, universities, research institutes and data-orientated private firms. “For under $10 million (€8.9 million) you can get your own rocket, your own destination and your own orbit,” says Beck. “It is a very well-proven vehicle.”

Meanwhile, the European Space Agency (ESA) is supporting companies to develop a small rocket launcher like Electron. “The competitive advantage of the micro-launcher is that they deliver your payload to the exact orbit you are looking for,” says Jerome Bertault, head of future space transportation at ESA.

The success of Rocket Labs in becoming the first and only operational micro-launcher in the world has been exceptional, says Bertault. “Their achievement has been ground-breaking by showing that you can have an orbital system that is done by private venture, privately funded. It is a big success,” Bertault adds.

A micro satellite weighs 10-100kg, while a nano satellite weighs less than 10kg. These small satellites are cheaper to build, launch and operate, which makes them attractive to those on a limited budget. These satellites have, up to recently, been launched as a secondary payload on large rocket launchers.

Yet, there is a growing, highly-competitive market for micro launch vehicles to serve the specific needs of these small satellites. For instance, there is the LauncherOne developed by Virgin Galactic and the Boeing Small Launch Vehicle. Boeing has said its Launch Vehicle can reduce the cost of a launch to $300,000 (€267, 249).

These micro and nano satellites have become more capable as miniaturisation of the processing performance, optics and communications technologies proceeds. A satellite the size of a shoebox can now hold a highly capable payload, and provide many services for the communications and earth imagery industries.

There are companies that are using this capability to build constellations of nano satellites. One example is the US firm PlanetLabs, which has launched more than 350 satellites into space that provide high quality Earth observation services.

Start-up companies centred on nano satellite-based services are assisted by the fact that as well as being cheap to launch, these satellites are easy to assemble and build. The payloads can quickly become capable, and start providing a service.

Ireland can win a share of the exploding market for small or micro rockets and satellites, because industry here is adaptable and strong in areas like materials, electronics and software that are relevant to these markets, says Gleeson.

ESA’s Bertault concurs. “We are working with a lot of companies in Ireland with equipment for launchers: you have in Ireland a very strong, very dynamic industrial base and micro-launcher companies are in touch with Irish companies.”