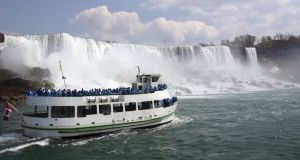 How can we understand such enormous quantities? Popular descriptions often involve counting the grains of sand on a beach. Some mathematicians refer to the number of litres of water flowing over the Niagara Falls, or the raindrops falling to earth every year.

In 1920, a kindergarten class was asked to describe the biggest number that they could imagine. One child proposed to “write down digits until you get tired”. A more concrete idea was to write a one followed by 100 zeros. This number, which scientists would express as 10 to the power 100, was given the name “googol” by its inventor.

A googol has no particular mathematical importance, but it has come to represent large numbers in general and the name – in modified form – was adopted by the behemoth we all know as Google. The idea was to express the boundless ambition of the company to index the entire world wide web.

The search for ever-larger numbers has been given the evocative name googology, and it is an active field of research for both recreational mathematicians and some professionals.

Large numbers occur in various branches of science, most notably astronomy and cosmology. Rapid advances in computing also require big numbers to describe calculation speeds and memory sizes. Some decades ago we had speeds measured in Mops, or millions of operations per second.

Now we have petaflops (10 to the power 15 operations) and speeds continue to increase exponentially. Soon the prefixes exa, zetta and yotta will be common; the number of operations performed by a one-yottaflop computer is one followed by 24 zeros, or a trillion-trillion.

The growth in memory size is equally impressive. From kilobytes (thousands of bytes) of storage, we moved through megabytes, gigabytes and terabytes – onward and upward.

How can we understand such enormous quantities? Popular descriptions often involve counting the grains of sand on a beach. This method was used by Archimedes; indeed, he considered not just a beach but the entire universe as known to him. Some authors refer to the number of litres of water flowing over the Niagara Falls, or the raindrops falling to earth every year.

An egg-cup of water has about Avogadro’s number of molecules, or six followed by 23 zeros. The observable universe has been estimated to contain 10 to the power 80 atoms. But it can be difficult to grasp the significance of these numbers.

It is simple to visualise a collection of one million objects. Consider a bunch of little cubes, each of side-length one centimetre: think of dice or sugar lumps. Line up 100 cubes in a row and add 99 more lines to form a layer of 10,000 cubes. Now stack 100 layers to get a block, like a large Rubik’s cube, with side-length of one metre, comprising a million little cubes.

Continue by lining up 1,000 such Rubik cubes, add more rows to get a layer with 1,000 rows and top it off with 999 further layers. The result is a cube of edge-length 1 km with a billion blocks, each containing a million little cubes. In total, we have 10 to the power 15 sugar-lumps, or a peta-lump.

As long as we just count collections, the numbers are constrained. When we consider rearrangements, the number of possibilities becomes “astronomical”. Take a row of 100 sugar lumps but now number them from one to 100. How many different ways are there to arrange them?

The first in line can be any one of them, giving 100 options. Next can be any of 99, and so on. The total number of possibilities is the product of the first 100 counting numbers, a quantity called factorial-one-hundred. It has 158 decimal digits, far more than a google.