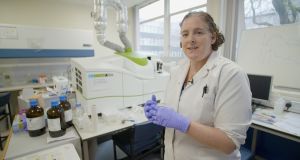 Prof Iseult Lynch said as ‘a woman in science’ she felt especially proud to see her work recognised.

An Irish scientist has been named the winner of the Royal Society of Chemistry John Jeyes Award for her research into microparticles and plastic waste.

Prof Iseult Lynch, who is from Dublin but works at the University of Birmingham, was announced as winner of the prestigious biennial award on Wednesday.

Prof Lynch is a member of a team of scientists carrying out research into the environmental health and safety implications of engineering nanomaterials and nanoscale plastic waste, such as microbeads in cleaning products and cosmetics. The information her team gather is fed back into product design, with the goal of developing safer consumer products.

Her research also strives to find alternative testing strategies to reduce the need for animal testing without compromising environmental or human health and safety.

Prof Lynch, who received a medal and £2,000 (€2,215) in prize money as part of the award, said that as “a woman in science” she felt especially proud to see her work recognised. She said she hoped her work could inspire other women, including members of her own team, to “strive for excellence and never give up”.

“I remember as a PhD student looking at the prize winners and being so impressed at their work, so to be among their number now is thrilling,” she said.

The award was founded in 1975 to commemorate the inventor and scientist John Jeyes and has been won by a number of individuals who went on to win Nobel prizes for their work.

The Royal Society of Chemistry describes itself as an international organisation connecting chemical scientists with each other and society as a whole, and it has more than 50,000 members. Its awards recognise “achievements by individuals, teams and organisations in advancing chemical sciences” across the world, according to a statement from the group.

Dr Helen Pain, acting chief executive of the society, underlined that in an era of “tremendous global challenges”, the need for science was more important than ever.

“It is important to recognise those behind the scenes who are making significant contributions towards improving the world we live in,” said Dr Pain. “The global chemical sciences community is one that covers many different specialisms, from health and climate change to product development, sustainable transport, and everything in between.

“In recognising the work of Prof Lynch, we are also recognising the important contribution this incredible network of scientists makes to improving our lives every day.”