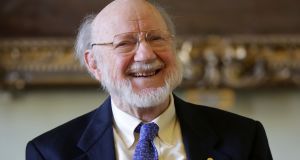 For Prof William C Campbell, Ireland’s only winner of the Nobel Prize in physiology or medicine, Sunday will mark another significant milestone in his remarkable life of scientific endeavour.

His 90th birthday will be celebrated at a small family gathering in Boston, but it will also coincide with publication by the Royal Irish Academy (RIA) of his memoir Catching the Worm – a story of the discovery of the drug ivermectin for veterinary use in livestock to eliminate parasites, and then its subsequent adaptation for use in humans.

In 1987, nine years after the latter discovery, his employer Merck Research Laboratories decided to distribute the drug free of charge, saving millions of lives in the developing world in the process. As a result, the World Health Organisation moved from treatment to elimination of River Blindness which afflicted much of Sub-Saharan Africa.

Prof Campbell, who is from Ramelton, Co Donegal, won Nobel Prize with others in 2015 when aged 85 and well into an enjoyable retirement.

His early education was in the converted attic of his home. His father, a local shopkeeper, employed a live-in tutor. He later attended Campbell College near Belfast and studied natural sciences at Trinity College.

The town had planned to unveil a life-size bronze statue of him by sculptor Paul Ferriter this weekend but this had to be postponed due to Covid-19. A local committee has decided instead to send him “a virtual birthday present”, according to Jean Winston who is helping to compile the digital gift.

It will include music and song; a poem by Denise Blake, a birthday card created by artist Laura Buchanan and a message from Minister for Education Joe McHugh, a fellow Donegal manwho has described the parasitologist as one of the most inspirational people on the planet, who has “arguably done more for humanity than any other Irish person”.

On Sunday evening, the RIA and the RDS will present Catching the Worm a filmed podcast – William C Campbell in conversation with Prof Luke O’Neill of Trinity College and Dr Claire O’Connell who wrote the book with the Nobel laureate – at 8pm via ria.ie/catchingtheworm

Prof Campbell said he was sorry he could not be in Ireland as planned but that he would be having “a wonderful time of togetherness with his family”.

In the podcast, he makes a strong plea for risk-taking and empirical research, especially in the search for new drugs, rather than the current scenario of using molecular biology to design medications.

There should be a place for chance discovery, he added, and advised young scientists to retain curiosity, exploration and a sense of adventure during their careers. “Being first to do something, that is perfectly valid,” he added.