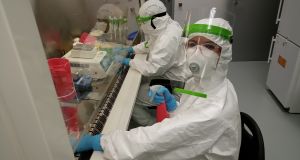 Researchers at the Central European Institute of Technology in the Czech Republicworking in BSL3 (biosafety level 3) labs, where they are isolating RNA from human samples that could be infected with Covid-19.

In the midst of the coronavirus pandemic, the need for research has perhaps never been so evident. Faced with an unknown enemy, we are relying on researchers to produce vaccines, antibody tests and teach us more about how to tackle this new virus.

“Scientists are given very little credit for the work that they have done in such a short period of time,” says Prof Mary Anne O’Connell, an Irish senior research group leader in molecular biology working at CEITEC (the Central European Institute of Technology) in the Czech Republic. Her research laboratory was among many that volunteered to conduct tests for Covid-19 when the virus first struck.

“Scientists have isolated Covid-19, sequenced it, studied it in different cell lines under different conditions. Currently they are working to develop a vaccine against it and if that is not possible to find, they will find some drugs that will lessen its impact on patients,” she says.

It’s not only biomedical scientists that are in high demand – researchers are needed to evaluate the impact of Covid-19 on the economy, the climate, society and on our mental health and wellbeing.

But as the world leans on research to provide us with the answers to these questions, the pending financial crisis is likely to put even more pressure on a system that’s already under strain.

Economic recessions don’t often lead to a boost in research spending, and the sector is already underfunded. Although the number of people with PhDs grew by 38 per cent in OECD countries between 2000 and 2009, government-funded research spending in these countries has only risen by 10 per cent in the last 20 years. The mismatch has meant that researchers have become increasingly dependent on temporary and short-term contracts, leaving them without job stability and without clear career paths.

“If you’re an early-career researcher, you enter a world where everything around you is designed to last no longer than three to four years,’ says Dr Gábor Kismihók, Research Group Leader at the Leibniz Information Centre for Science and Technology (TIB). He is also co-author of a Declaration on Sustainable Research Careers released last year by the Marie Curie Alumni Association and EURODOC, the European Council of Doctoral Candidates and Junior Researchers, which outlines the increasing pressure that young academics find themselves under, and highlights the precarious contracts that they depend on.

“Before, research funding was a longer game, it was more a marathon. Now it’s a sprint and it’s really hard to deliver high quality research in these circumstances,” he says.

One type of research that could be left by the wayside is curiosity-driven, or blue-sky research, which has led to groundbreaking discoveries like penicillin and DNA fingerprinting. This type of research involves exploring aspects of science where real-world applications are not obviously apparent. It can yield high pay-offs, but there’s also big financial risk involved.

Funding bodies are less likely to award blue-sky grants, preferring to finance research that has obvious, real-world applications. Usually only researchers with permanent positions can afford to do curiosity-driven research, so as trends move towards short-term contracts, we could see fewer and fewer blue-sky breakthroughs.

Lack of job security also means researchers are forced to focus their attention on winning their next grant or their next contract rather than on the research project at hand. Out of a typical 5-year grant, O’Connell says, a researcher might spend one full year setting up a lab and then another six months writing grant applications to stay afloat towards the project’s end.

“You really need to have some stability in your life [to do high-risk, high-reward research] and if you’re spending your whole time writing grants or going from one position to another, you just can’t do it,” she adds.

The system is also draining young researchers, as outlined by the declaration. In the race to win a dwindling number of academic positions, they take on additional teaching and mentoring responsibilities, help undergraduates with labwork, engage in communication and outreach activities and constantly try to get published in high-impact-factor peer-reviewed journals. This is on top of their normal day-to-day research work for their PhD.

“Generally over the last 20 to 30 years the labour market position of young academics has been eroded,” says Prof Seamus McGuinness of the Economic and Social Research Institute (ESRI) in Dublin. “The reality is that you will not get a junior lectureship in Ireland or in any other country now without having a PhD and a quite well-developed publication record. But in the past, a PhD would have been sufficient, and not actually even essential for a junior lectureship role.”

Many researchers accept temporary positions in the hope that this will lead to a permanent post in the future. But according to McGuinness, the people who are on permanent contracts in academia are just as likely to have been previously unemployed as they are to have been on a temporary contract. So instead, the researchers often end up on a constant stream of temporary gigs, or else leave academia altogether.

“From my perspective, I have always worked from contract to contract. I don’t know of any other way,” says Peter (not his real name), a researcher in his late forties. “It would be nice to have security and to dedicate myself to a particular research field. To always be thinking of being out of a job in your later career is hard.”

O’Connell advised her own son to forego a PhD in favour of becoming a professional rugby player, as she thought the career prospects in sports would be better than in research.

“I suggested that instead he should have a career in rugby! That’s the truth,” she says. “He’s very good at rugby of course. But the future of funding is short-term contracts which is really hard.” And it looks likely that it will soon be even tougher. Her son recently heard that the university that had accepted him to start a PhD position is suspending their entire PhD programme for next year, possibly due to the economic impact of the coronavirus.

The employment outlook for academic researchers does not look good post-2020. Universities will struggle and although researchers from all disciplines are trying to help the Covid-19 effort as best they can, most experts agree that an economic downturn will mean less resources for research.

“There is going to be a big bill for this pandemic in terms of lost productivity, lost taxation, the costs of mainly epidemic unemployment benefits, the pay to furloughed workers. How is that going to be paid?” says McGuinness. “I can’t see many upsides for young researchers going forwards, I think we’re going to be in a fiscally changed position and you probably won’t see more money going towards education and research.”

“The resulting economic downturn inevitably means reduced funding, which will reduce the number of opportunities for new contracts when existing ones expire,” says Dr Mark Jessopp, lecturer of Zoology in University College Cork. “Universities are all being hit hard financially and with no government support for the sector (which has been systematically de-funded over the past decade), there will be fewer ‘permanent’ academic posts being offered for the next number of years.”

In terms of EU funding, there’s some hope. The European Commission recently proposed a budget of €94.4 billion for the next major European research funding programme, the Horizon Europe scheme.

But Prof Christian Egenhofer, senior research fellow at the Centre for European Policy Studies in Brussels, says this doesn’t necessarily mean the proposal will be accepted by the European Parliament and especially the Council of the European Union, which will have the final say.

“Research funding is vulnerable and might be the target of reductions. Usually, if cuts need to be made, then research or security will be cut,” says Egenhofer.