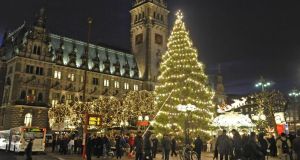 “Trees are approximately conical in shape . . . Cones are developable surfaces: they can be flattened out into a plane without being stretched or shrunk.” Photograph: Fabian Bimmer/AP

A minor seasonal challenge is how to distribute the fairy lights evenly around the tree, with no large gaps or local clusters. Since the lights are strung on a wire, we are not free to place them individually but must weave them around the branches, attempting to achieve a pleasing arrangement. Optimisation problems such as this occur throughout applied mathematics.

Trees are approximately conical in shape and we may assume that the lights are confined to the surface of a cone. The peak, where the Christmas star is placed, is a mathematical singularity: all the straight lines that can be drawn on the cone, the so-called generators, pass through this point. Cones are developable surfaces: they can be flattened out into a plane without being stretched or shrunk.

Solution of the light problem for a cone is tricky, so we might begin by following the example of the biological modeller. A dairy farmer wrote to the local university, asking for suggestions on enhancing production. After months of intensive investigation, a report was sent to him: “Consider a spherical cow in a perfect vacuum. . .” The spherical cow is a light-hearted (ha-ha) metaphor for oversimplified scientific models of complex real-world phenomena. Modellers sometimes reduce problems drastically to make calculations easier, thereby rendering the solutions irrelevant to practical applications.

So, let us consider a spherical tree. If we demand a rigorous solution, with all neighbouring lights equidistant from each other, there are exactly six solutions. The first, with two lights, one at the north pole and one at the south, makes for an unexciting display.

The five remaining solutions correspond to the five Platonic solids. The most familiar such solid is the cube, with six faces and eight corners. There are also solids with four, six, 12 and 20 corners. It is a remarkable result, known to the ancient Greek mathematicians, that no other perfectly regular polyhedra exist.

The placement of the lights is a “constrained optimisation problem”. We need to find an arrangement that is as nearly uniform as possible, with no lights too close and no large voids, and the constraint is that the distance between each pair of neighbouring lights is limited by the length of flex between them.

Imagine replacing the lights by small electric charges, all positive and confined to the surface. Since like charges repel each other, they will move apart, eventually finding an equilibrium distribution that minimises the potential energy. This will ensure that no two charges are very close together. They will achieve an optimal configuration.

There is another, more vexatious, problem with Christmas-tree lights. When you retrieve last year’s lights from the attic, they are invariably in a state of extreme entanglement. How to unravel them? Light sets come in two principal forms, linear and looped. In the first case, the lights form a linear array with a definite end-point. Disentangling these is simple in principle: find the free end, and systematically pass it back under or over wires that it crosses, while preventing re-entanglement of the freed section. This is like untangling a garden hose.

With looped lights, there are no free ends. Unravelling them can be very tricky, but you may be comforted that there is a solution: however confusedly intertwined they appear, the string of lights that began life as a simple loop must maintain that property as it becomes twisted and entangled. As the topologist might put it, the light set is isotopic to an unknot (a circle). Happy Christmas!