The trouble with ammonia

With levels of the toxic gas rising due to intensive livestock farming, scientists warn the impact on Ireland’s ecological and public health will be very serious 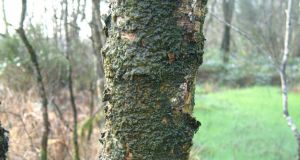 Algae on a tree in Moninea Bog in Co Fermanagh, where lichen and sphagnum moss were killed by ammonia.

In 2007, Mark Sutton, an environmental physicist, decided to visit Moninea Bog in Co Fermanagh. This bouncy, wet, raised bog had always been packed with rare sphagnum mosses, exquisite multi-coloured lichens and insect-eating sundew plants. It was known as one of the best of its kind in Europe. But what Sutton found was dire.

“What I saw was white broken bits of lichen, like dead bones,” recalls Sutton, a professor at the Centre for Ecology and Hydrology in Edinburgh. “It was a really dramatic death. In one part of the bog almost all the sphagnum moss was dead. The site was hammered.” The rich diversity of lichens lay dead, replaced by a sick gloop of slimy algae. The cause of this degradation soon became clear: ammonia gas.

Ammonia is toxic, pungent and suffocating. It causes air pollution and is a greenhouse gas, and in places like Moninea Bog it can wreak havoc. Scientists, including Sutton, say that without urgent action, the impact of ammonia on Ireland’s ecological and public health will be very serious.

It’s a stark warning because ammonia levels are rising. There’s about 10 times as much of it in our atmosphere as would naturally occur and in 2016, Ireland exceeded the legally-binding EU ammonia limit for the first time. We won’t meet our 2020 targets and we’ll face millions of euro in EU fines as a result.

The inescapable fact is that 98 per cent of emissions comes from intensive livestock farming. The rapid expansion of the dairy sector is one of the main reasons why our 2016 EU limits were exceeded. When it comes to ammonia, agriculture is out on its own.

Ammonia is a form of nitrogen. Intensive agriculture is entirely dependent on artificial nitrogen to stimulate crop growth (particularly grass); 300,000 tonnes of it is spread on grasslands every year. This releases ammonia gas into the air.

This is also true – but on a vastly larger scale – for livestock manure. As cows eat nitrogen-rich grass, they flush the excess nitrogen out of their bodies through their manure. Farmers store this manure as slurry and use it as fertiliser; 40 million tonnes of it are deposited on grasslands each year, and with it comes ammonia.

Ammonia has a habit of latching onto everything. “Ammonia is notorious for being very sticky,” says David Kelleghan of UCD’s School of Biosystems Engineering. It combines with other air pollutants to form minuscule particles, known as PM2.5, which can trigger respiratory problems when inhaled into lungs. Air pollution causes 1,600 premature deaths in Ireland every year.

As ammonia gas wafts through the air into woodlands and bogs, it has the potential to significantly damage species. Lichens are vulnerable because they draw their nutrients not from roots, but from the air. If this air is ammonia-rich, the lichens will die. It’s as simple and deadly as this. “Recently I visited another bog in Northern Ireland and saw the death of heather and sphagnum,” Sutton says. “It’s in the middle of a region of intensive dairy farming. Like Moninea Bog, this site is being hammered too.”

Habitats near intensive farms are vulnerable. In 2013, volunteers across Ireland received an ammonia monitoring box in the post. It was sent to them by Brian Doyle from UCD’s Soil Science department, who wanted to know more about ammonia levels in 25 sites. Doyle asked the volunteers to leave the boxes outside for two weeks and then post them back to him in UCD. Doyle then sent them another box. “It was very obvious that ammonia concentrations were correlated with lots of cattle,” Doyle says. “There were very low levels in the west, but as you travelled further east concentrations got stronger.” Higher levels were found in the Golden Vale, north Cork and Limerick – areas known for dairy production. Some sites exceeded critical levels for ecological health.

It’s our outstanding and biodiverse habitats that are under immediate threat from ammonia pollution. There are 420 of these so-called “Natura 2000” sites, for which the State bears legal responsibility. Scientists have been testing these sites for ammonia and their results are unambiguous. “The vast majority of our Natura 2000 sites are being affected by ammonia,” notes David Kelleghan, who recently submitted his PhD on the subject. Where slurry is spread, nearby sites have high concentrations.

“The problem with ammonia is that it’s not just contributing to a national problem, but to a local one; to vegetation, habitats and species nearby,” adds Kelleghan. As the State continues to encourage dairy farmers to expand and intensify – knowing the potential negative impacts of ammonia on legally-protected habitats and clean air – the threat of legal actions loom.

The impacts will reach far beyond lichens and mosses. “Ultimately, an oak tree right next to a farm is at risk from high ammonia levels,” adds Sutton, who predicts nitrogen-loving plants like holly, ivy and brambles will become more common on farms.

Farmers may not be aware that ammonia poses such a problem. The Department of Agriculture and Teagasc have known about it for years, but whether the severity of the issue has been effectively communicated – for example, through the publicly-funded farmer discussion group network – is unclear. “What needs to happen? A lot, and quickly,” Kelleghan believes. “This should have been done years ago. Ireland is an agricultural country, everyone knows this. Agriculture is the source of ammonia and this issue should have been highlighted when expansion was planned.”

The UK has measured ammonia since 1996. Doyle’s work in 2013 could have initiated a permanent monitoring network across Ireland. Given the size of our agri-industry and the official emphasis on sustainability, one would assume a positive response from State authorities. A show of serious intent, even?

Scientists agree the most effective way to reduce ammonia is for farmers to stop using the “splash plate” method to spread manure, which sprays ammonia into the air. This method was abandoned by Dutch farmers decades ago. Instead, manure should be put directly into the soil. “When you are spreading manure, get it out in neat rows,” Sutton says. “Don’t fling it all over the grass. Nitrogen will then stay where the farmers want it: in the grass.” Slurry pits also need to be covered. “Ammonia wants to get into the atmosphere like gas wants to get out of a Coke bottle. Farmers need to put a lid on it to keep the gas in.”

Urea fertiliser is cheap, but it’s a potent source of ammonia gas. Farmers might need incentives to use lower-ammonia alternatives. It may also be time to follow Northern Ireland’s lead and ask the EPA to issue pollution licences to dairy operators, compelling them to mitigate the ammonia problem before they expand in size.

There are barriers to change. Many farmers are unable to reduce cow numbers or invest in new methods because they are shackled to bank debt. Who should pay for the costly technologies, such as slurry injectors? Is it fair to use public money to clean up the problem? Or should the agri-industry, which has benefitted so much from expansion, bear the cost instead? “Twenty five per cent of value of the Common Agricultural Policy is lost through nitrogen pollution; it is crazy that it isn’t at the heart of CAP discussions,” according to Sutton. “If you are getting public funding, a significant portion should be for ammonia emissions reduction.”

In the decade since Mark Sutton first visited Moninea Bog, nearby farming activity has reduced. Sphagnum mosses and lichens are slowly growing again. “The trees are still covered in slime but it’s not as bad,” he points out. “If you reduce ammonia emissions, there’s a chance for biodiversity to come back.”