Who was Paul Quinn and why has his murder become an election issue? 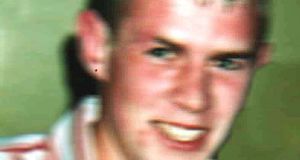 Paul Quinn, 21, who was found at a farm house outside Castleblaney beaten to death. Photograph: Pacemaker

Who was Paul Quinn?

Quinn was a 21-year-old from Cullyhanna, south Armagh, in Northern Ireland, five kilometres from the Border. He worked as a lorry driver and operated machinery on building sites.

When was he murdered?

On October 20th, 2007, Quinn was found gravely injured in farm buildings in Tullycoora, near Oram, Co Monaghan, about 10 kilometres from his home, just across the Border in the Republic. He had been badly beaten over a sustained period but was still alive when his girlfriend arrived at the farm shed. He was brought to Our Lady of Lourdes Hospital in Drogheda at about 6pm that day and died a few hours later. His death came just over a decade after the IRA’s second ceasefire and just over two years after the IRA announced an end to its armed campaign.

How was he murdered?

Quinn’s family suspect that he was lured along with friends to the farm because he was involved in a row with the son of a senior member of the IRA. At least nine men, dressed in boiler suits, masks and surgical gloves, took part in the attack that lasted about half an hour as his friends were held captive. Another 10 are said to have acted as lookouts on the day. His mother, Breege Quinn, has said that the gang attacked him with iron bars and nail-studded cudgels. She said every major bone in his body below his neck was broken and that his right ear was torn off. While Quinn was being beaten, one of his friends, who survived, reported that one of the men told him: “We are the bosses around here.”

Six men were arrested in July 2008 in separate operations by the Garda Siochána and the Police Service of Northern Ireland and were questioned in Monaghan and Antrim. One of the men arrested by the PSNI was a senior IRA figure in south Armagh. Another man was arrested by gardaí investigating Quinn’s murder in 2016. No one has ever been charged with his killing.

Who is Conor Murphy and what position did he hold at the time?

Conor Murphy, who is from Camlough in south Armagh, is a Sinn Féin politician. Formerly in the IRA, he was sentenced to five years in prison in 1982 for IRA membership and possession of explosives. Murphy is now a member of the Northern Ireland’s Assembly for Newry and Armagh. He was an MP and minister in Northern Ireland’s government at the time of Quinn’s murder. He became the North’s Minister for Finance last month when powersharing at Stormont was restored.

What were his comments about Paul Quinn’s murder?

In an interview with BBC Northern Ireland’s Spotlight programme on November 13th, 2007 – less than a month after Quinn’s murder – Murphy said: “Paul Quinn was involved in smuggling and criminality and I think everyone accepts that.” In 2017, he denied claims that he tried to smear Quinn as “totally without foundation”.

What did Sinn Féin’s leader Mary Lou McDonald tell Bryan Dobson in an interview with RTÉ on Monday night?

McDonald said that she had spoken to Murphy and that he was “very clear that he never said” that Quinn was involved in criminality and “that that is not his view”.

What did McDonald tell Miriam O’Callaghan in the leaders’ debate 24 hours later?

The Sinn Féin leader acknowledged her comments the previous night. When O’Callaghan read out Murphy’s comments from his 2007 BBC interview, she said that “those things should not have been said”. McDonald later said Murphy would retract and apologise for his comments.

McDonald told reporters yesterday that she did not think Murphy misled her. She said the comments were made more than a decade ago and that it was an “honest mistake” on her part. She said she had thought Murphy was speaking generally about criminality and smuggling around the Border region, and that she did not believe his comments were “quite so pointed” about Quinn.

Will there be disciplinary consequences for him?

McDonald has said that Murphy will not step down from his role as Northern Ireland’s Minister for Finance and that she would not remove him from the position.

It could damage her party’s standing. Her “honest mistake” has become one of the dominating issues in the final week of a close election campaign.

Did Conor Murphy check with the IRA if they were involved?

Yes. Shortly after the murder, he said that he spoke to IRA members about the murder and had been told the IRA was not involved.

Was there any independent view taken of the Quinn murder?

Yes. Northern Ireland’s now defunct paramilitary watchdog, the Independent Monitoring Commission, did not attribute the killing to the IRA and found no evidence linking the murder to its leadership, saying that it was “clearly contrary to the instructions and strategy of the leadership.”

However, the commission said in a 2008 report that “amongst those involved were people who had in various ways been associated the PIRA [Provisional IRA] at a local level, including as members of the organisation.” It said the attack was carried out by locals and “arose from local disputes,” adding: “Whatever the immediate reason for the killing, certain aspects of these disputes go back some time and were not unconnected with continuing illegal activity.”

What did the commission specifically say about these local people linked to the IRA?

The commission said some of these people were “accustomed over a substantial period of time to exercising considerable local influence, collectively and individually.”

Commenting on how this affected their behaviour, the commission said: “This would have led such people to expect what they would consider as appropriate respect from others and to being able to undertake their activities - including criminal ones - without interference; they would find it very difficult to accept any waning in this influence and respect.”

What has Paul Quinn’s mother had to say?

Breege Quinn said Murphy must apologise for his comments on national TV and that he should also go to the PSNI and the Garda and give the names of the IRA people in Cullyhanna that she believes are behind the killing.

On Wednesday afternoon, Sinn Féin issued a statement in which Murphy said he “very much” regrets the remarks and he withdrew them “unreservedly”. Murphy also repeated the apology on RTÉ television but declined to explain what information he had received from the IRA.

What is the state of play with the investigation into Paul Quinn’s murder?

Quinn’s murder “remains an active live investigation,” said a Garda spokesman. The investigation is the subject of an examination by the Garda’s Serious Crime Review Team in conjunction with investigating gardaí from Carrickmacross in Co Monaghan.

The Garda said that it continued to appeal to anyone with any information to contact the Garda at Carrickmacross on telephone number 042 9690190, the Garda Confidential Line 1800 666 111 or any Garda Station or the PSNI.